Tuesday 15th May
Seven of us at Broadway today for a bit of seriously hard work .
Fortunately Malcolm and Steve had been at Broadway yesterday with a mini digger to excavate some holes in the ballast for the concrete stools and blocks but a bit of fettling was required to get levels and positions right. Carl S taking a well earned breather: 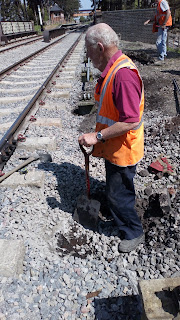 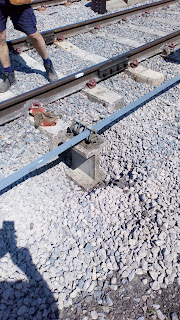 Some way still to go! 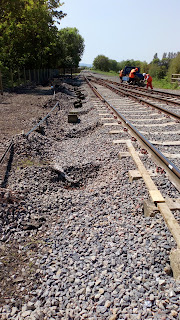 Len W follows on with the bolting up of the rods. Doing this as we go along checks that the alignment looks good. This shot shows us approaching today's goal of us reaching the compensators. Team 'B' of Malcolm W, John P and Keith L are in the hole at the top of the picture: 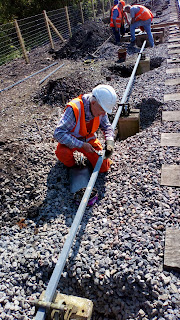 The two compensators are to be mounted on two steel plates on four large concrete blocks. Putting these on the pick up back at Winchcombe with the Telehandler was a breeze, but getting them into the hole back here was a little more tricky - at least a 3-man lift, but the rails came in useful for a breather! 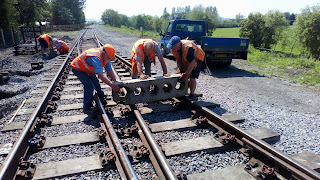 After much mauling and tweaking the blocks have steel plates bolted on and the first compensator fitted. We are now in almost the correct position. 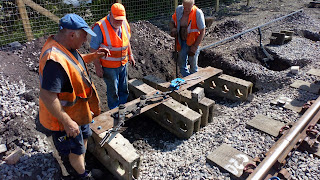 But this is where we left things at the end of the day. A bit more
adjustment to line up with the rodding and then holes can be filled in: 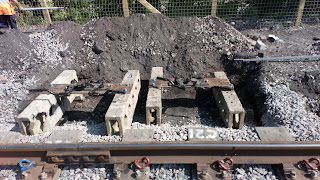 And a view back towards the bridge of the stool planting: 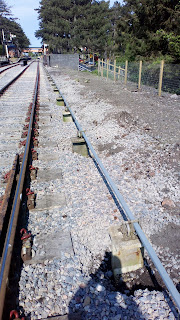 In my absence last week (to make a change from point rodding duties) the team had cast two concrete blocks on which pulley wheels for signal wires are mounted. These will direct wires under the tracks. This one at the base of wooden post - a single wheel : 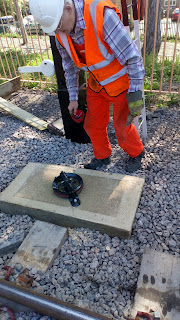 And one opposite at the base of the bracket signal for a double wheel. 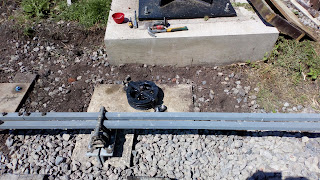 So next week all being well we should complete stool installation up to the point where connections will eventually made to the points and fpl.