Great to be back - I have been a bit tardy about compiling a blog as some of us have been back in action for a couple of weeks so far. So a quick resume of these two weeks before bringing you up to date with this week's activity.

We continue with the routine refurbishment of lineside cabinets. The main one in question has a phone compartment  at the top which is like a sash window with an opening panel to access the phone which has two hidden counterbalance weights 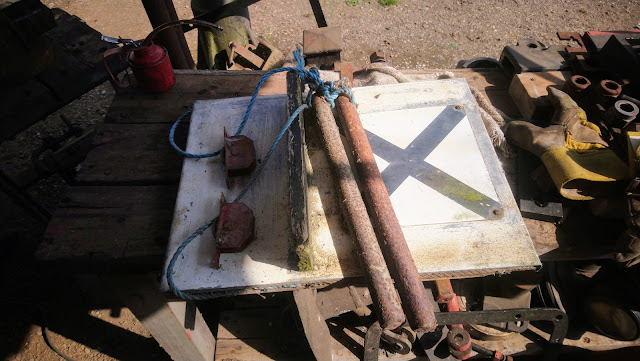 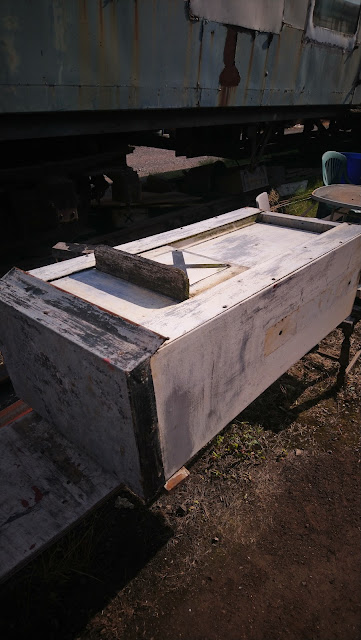 Having cleaned all external surfaces with an angle grinder equipped with a rotary wire brush, time to paint. We have decided to paint all the inside surfaces with red oxide primer (including the wood) - to be followed with dark grey undercoat. This should preserve it for a few more years. 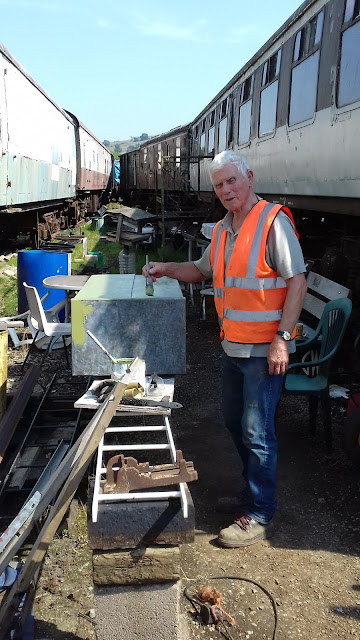 The weather was not very welcoming today - teemed down with rain for most of the day. Unfortunately we spent a lot of it outside in the wet trying to trace a track Circuit fault in the up line section through Winchcombe. This meant a locked bracket signal into the station.

Line walking didn't show any obvious problems although the insulation between a fishplate and rail at the start of the track Circuit opposite the signal box looked dodgy so we decided to replace it. 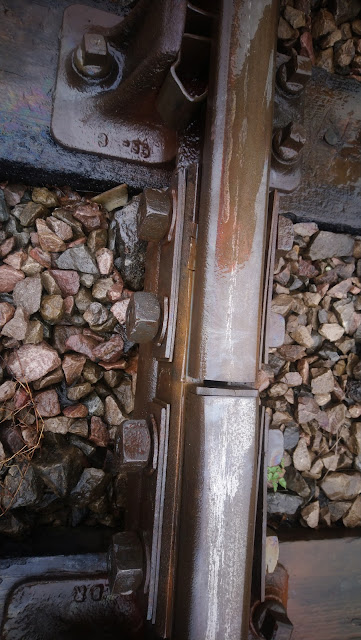 After much wrestling with tight bolts and fitting new plastic insulators  to this joint it did not solve the problem. The old ones weren't in the best condition with some cracks and bits broken off 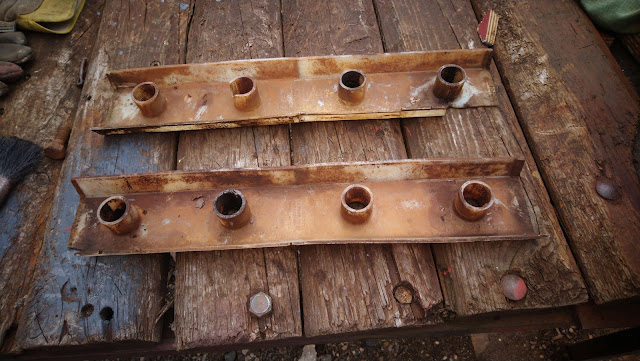 So, on his return from coach shunting Neil C came with meter testing equipment to try to hunt down the problem.  With the meter connected across the tracks showing zero voltage we waggled the feed wire adjacent to the  fishplate with the replaced insulation and lo and behold an intermittent voltage which again disappeared. On closer inspection the feed wire had been trapped and crushed between the bottom of the rail and a chair. A lucky spot and problem solved with enough spare cable to reconnect and tie up out of harms way. 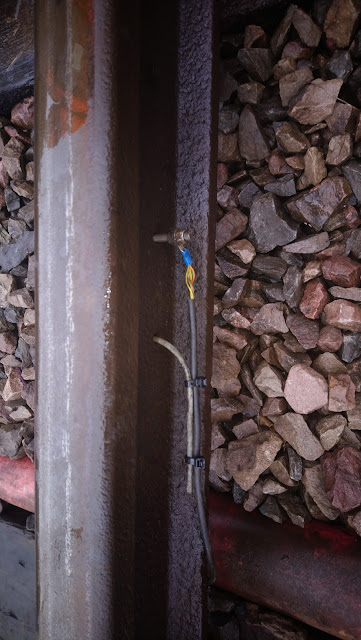 A very relieved signalman now with an unlocked signal!
Wednesday 26th August
Three of us in attendance with various tasks to go at. I continued with the painting of the lineside cabinet with the sash window type opening for a phone:
Here it is open: 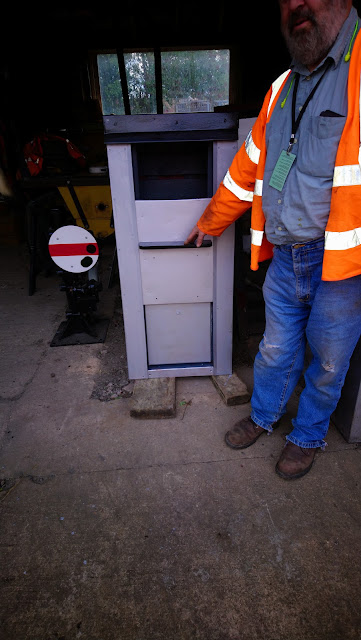 A ground signal needs to be replaced at Toddington so Peter W and Keith L dismantled a heavily weathered spare. 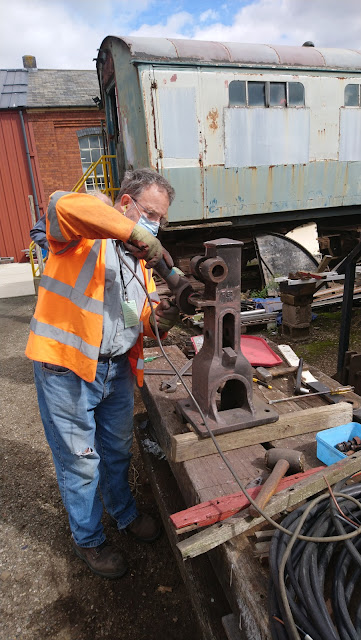 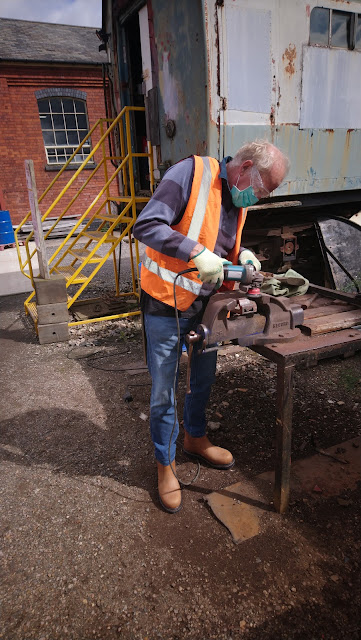 And had most of the dismantled parts cleaned and prime painted by the end of the day: 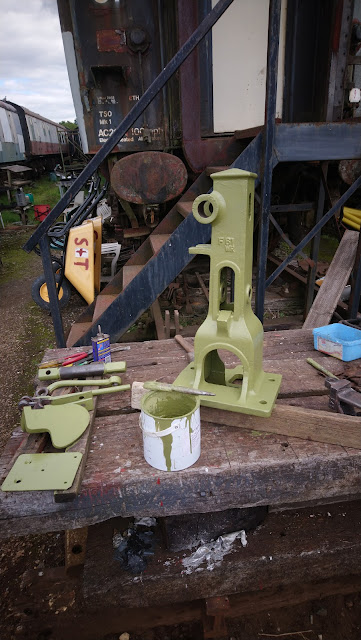 Malcolm W has been preparing and adapting a rather unusual GWR  lamp case which will be used to illuminate the direction indicator signal at the Broadway headshunt.

This case has a side opening door in addition to the normal top opening. 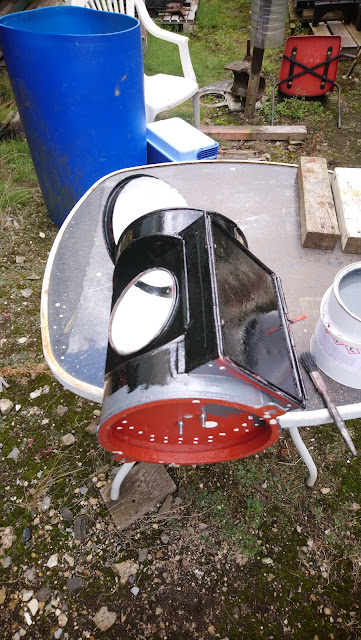 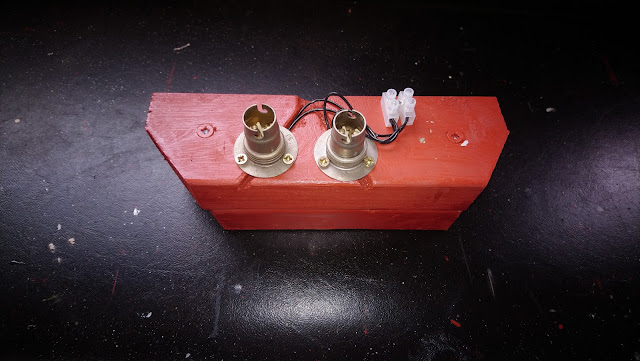 This lamp case will mount behind a large frosted glass plate which should diffuse the light and make the indicating letters stand out.

During the modernisation of the circuitry of most of the cabinets along the line, a considerable number of spare connection blocks have become available. Some of these will be required at Broadway. Most of them are in a dirty/greasy state so we decided to remove all nuts and washers to do a proper cleaning job in solvent. Here's the first bucket load. 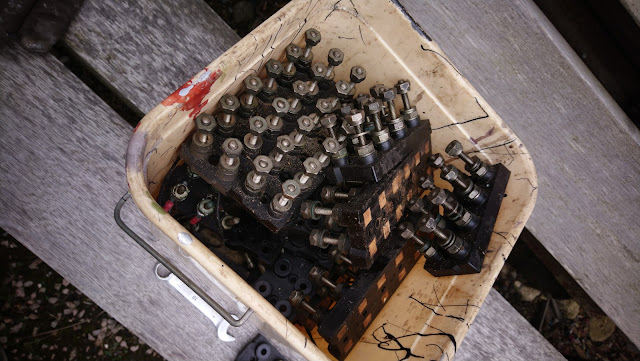 A bit tedious, but at least we could sit down doing it!!

Just noticed a couple of entries about the contents of the trackside cabinets and the batteries inside the new grey boxes which NC is installing at the moment.

The grey boxes have been tumbling off the production line in my garage for some time. They are based on a proven, reliable system which I developed a decade ago for the new signal box at Gotherington.  Here is a brief description of how it works.

The box contains two Cyclon 2V 25AH batteries which are the heart of the track-circuit system. They are extremely rugged and compact. When  properly looked after they have a minimum, 10 year maintenance-free life. NC's recent tests on some of the oldest batteries we have, show that they are still in excellent condition after years of trouble-free service.

The batteries are kept at a steady 2.25V per cell by a simple electronic regulator which is also in the grey box. The normal feed to the track circuit is therefore 4.5V. The regulator's input normally is 48V, fed down a pair of wires from the signal box. In the event of a supply failure the batteries are capable of maintaining the feed to the track circuits for several days. When the supply is restored the regulator recharges the battery.

NC's plan is that the grey boxes eventually will replace the variety of  track circuit supplies currenly installed along the length of our railway.

The production line is still open!

Just a quick note to say that yesterday I visited site and ran a set of test calls which fully utilise the system - just to be sure that it wouldnt cause a problem wth the preparations for reopening which start tomorrow with the test trains.

Delighted and quite proud to say that all appears well

We had come to the conclusion that the problems were not necessarily obvious from the diagram so we had to think outside of the sheet of paper.
Bank cleaning was well overdue and we wondered what effect sticky banks would have on the release process- was this allowing something to go out of sequence?, not a situation that I have ever met before.
So off we set with a manual bank cleaner and yellow tape, doing three banks for now just as a trial. +
Also, whilst the selectors were jacked out it was a chance to look at lubrication particularly around the shaft area. I have long believed that with older kit its best not to fiddle with it any more than you have to- indeed AT&E later discontinued all routines as they found they introduced more faults than they cleared. I understand that the GPO also took the same view in later years (1970's).We then busied the selectors that we hadn't serviced and low and behold the fuse blowing ceased as did other odd symptoms.
The problem then settled down to permanent engaged on the first tie line. AT&E called it the D wire (aka PO P wire) to test for line engaged or free. We should therefore have tested a 150ohm battery condition on Tie line 1  but we didn't. We did on Tie 2 but not Tie 1
All the time we kept going back time and again to the same question "  what had changed since shutdown"
Problem solved
The wire in the loom between the resistor and bank outlet 19 was dis!
Possible reason
Perhaps the current surge which was causing the fuse to blow finally burnt an air gap in a crack in loom?? and standing for three months  allowed it time to oxidise and go HR?
Who knows, but we left it all working once again.
Next Visit: Bank Cleaning and lube check
Mike  Stephenson and Paul Dinucci
S&T
Posted by Mike S at 10:09 13 comments: