A super turnout today with 10 of us (must have been the potential of  mince pies at break time!)

Lots of activity on the cabling front today.
The existing cables between Far Stanley and the distant signal just south of Greet tunnel (a distance of 1700 metres) have to be replaced. These are a collection of 25 pair and 30 pair cables with two lineside cabinets and 5 troughing joints. The troughing joints are pretty basic and not well protected and subject to rodent "nibbling" and water ingress causing intermittent faults.
So - the whole of this 1700m will be serviced with one continuous 10 pair cable (we only need 7 pairs over this section).
Steve W and his JCB have been digging a 12" deep trench over this length to bury it: 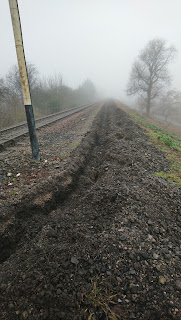 A small lineside cabinet is being installed at the distant signal to terminate this cable. This will join to the remaining bit of (overkill) 30 pair cable down to the electrically operated signal just before Greet tunnel. This cabinet will service the lamp on this signal and the  adjacent treadle (triggered by the engine wheels) which rings a bell in the signal box to alert the signalman of a train approaching the tunnel 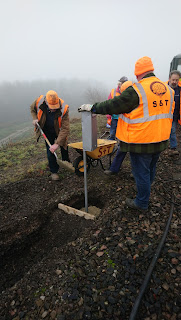 Neil C then wrestles with removing the outer coating and steel wire armour on the 30pair cable - it really is difficult to prepare the ends to reveal the wires inside - there is a knack to it combined with brure force! .Connections to the box will be done tomorrow 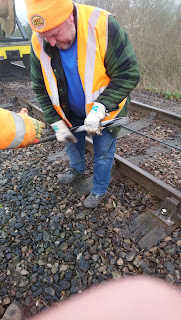 Here's what the inside of a 30 pair looks like: 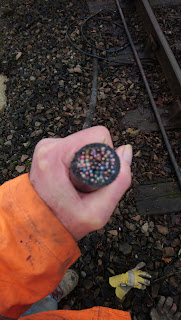 One of the large lineside boxes we removed was a connection nightmare - don't quite know how it got into this state - been here from the dawn of the railway I should think! 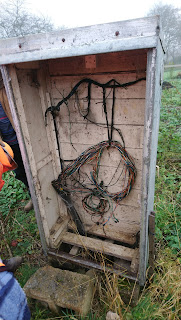 And removing a cable joint from a concrete trough 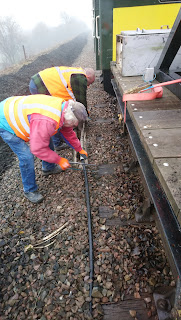 OK that's got rid of the old stuff now the new cable can go in. This had been unrolled from a drum on the diesel railcar previously and had already been terminated at its southern end so this was now a track walk to feed it into the trench.
We passed Lineside Clearance doing a grand and noisy job with a 360 machine with an awesome flail mincing everything in sight! 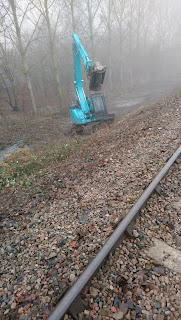 But I digress. Having installed the new cable in the trench (which Steve will now fill in again with the JCB) we turned our attention to removing the now redundant cables. These are buried in ballast up near the ends of the wooden  sleepers and because P Way have an imminent program of life expired sleeper replacement over this section we need these cables out of the way.
So the cunning method of getting them out is to attach an end to the railcar trailer and slowly pull them out 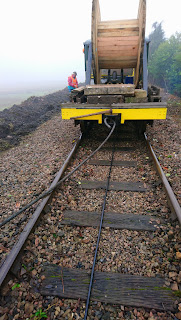 Then drag the extracted length along the track and deposit it in Winchcombe yard.
This was repeated for the second length.

Back at Winchcombe we dismantled the scaffolding round signal 4 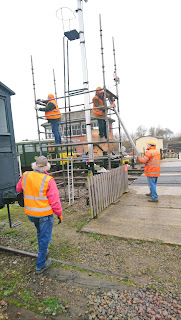 And here it is finished with the scaffolding team posing: 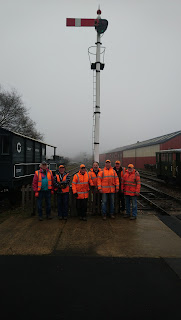 And finally a photo of the whole S & T team gathered in front of our notorious "workshop". We don't all fit in at mess-time so here's hoping that all those rumours of a new workshop will materialise in the new year! 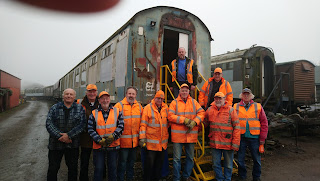 Seasons greetings to all my blog followers

Work on two fronts today. Neil C and Jim P went off to Broadway to do some preparation for electrical wiring.
While the rest of us remained at Winchcombe to carry on with cleaning and painting.
But first, a quick report on progress at Broadway. In order to carry wiring (tidyly) from  the electric locks and contact boxes trunking has been installed from the lever frame to the connections board: 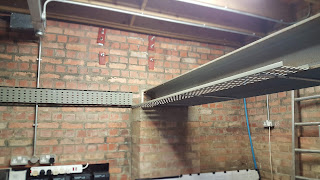 Progress on the connections board showing external cables terminated, some wiring clips and power distribution holders to lower right : 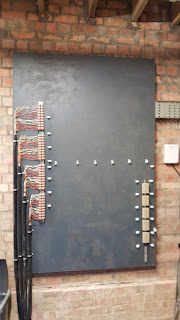 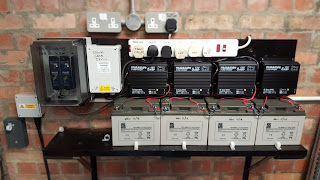 (above pictures courtesy of Neil Carr)

Back at Winchcombe we are re-conditioning a large lineside box which is going to be installed in the yard of Church ward House for outdoor electrics. 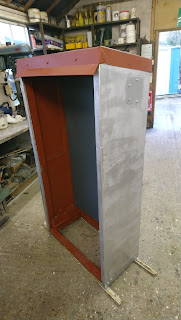 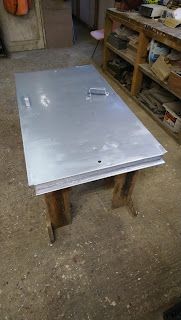 Will need a second coat of aluminium paint on the outside surfaces next week, the top to undercoat and then black gloss - inside colour to be decided. It was raining for most of the day so we retreated to the Building Services workshop to find some respite, hope they don't mind us invading their space!

And there are always more Signal parts to sort out. Finials taking centre stage here: 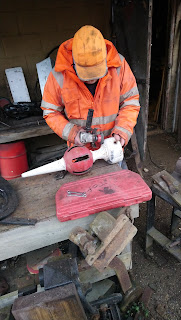 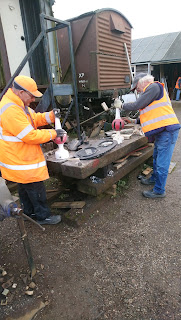 At least it remained dry today so working outside to do some painting was OK.
But the first objective was to re-assemble all the fittings on the freshly painted signal post No. 4 (Winchcombe platform 2 starter). The crows nest has been cleaned and re-painted with new "creosoted" boards fitted. 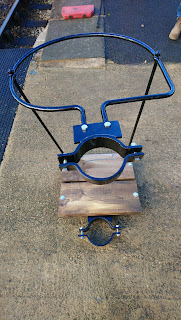 Starting at the top, we have to haul these heavy parts up by rope and pulley - heavy lumps. And then finishing at the bottom with the balance weight assembly 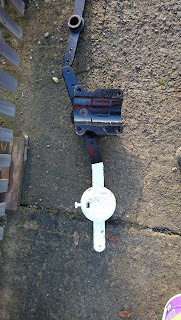 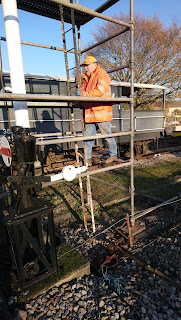 Job complete at the end of the day - the scaffolding can now be removed (and taken to Broadway next?!) 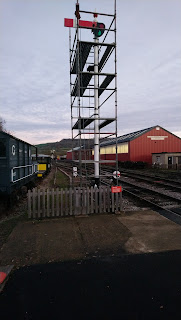 It just remains to fit new cabling for the light in the lamp casing - this can be carried out from the crows nest in due course. No detector on this signal so wiring is a minimum. 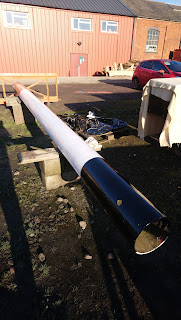 One of the two remaining pieces to complete the part count for the new Broadway bracket is now complete after machining in the Toddington machine shop. The pivot bracket that holds one of the double balance weight arms - the pivot pin slides in beautifully - a precision fit! Well done the machinist. 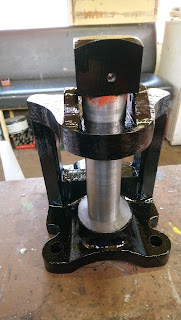