A bit more drilling today to finish the series of holes to mount the point rodding cranks and signal wire wheels. Here's Jim P tightening the wheels on the C-channel: 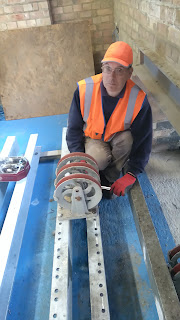 And here's the finished set: 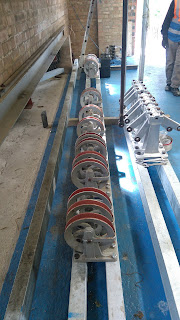 This just leaves 5 more pulleys to be fitted to the 2 LH C-channels ; these are for the signal wire adjustment system.
There was more work going on above this with Malcolm W continuing to fit the remaining retaining bars on the locking trays. To assist with all the drilling required we have installed the pillar drill (
originally situated under Toddington box) on Neil Carrs' substantial work bench. This will be a great  asset when we start fitting the locking bars, etc. 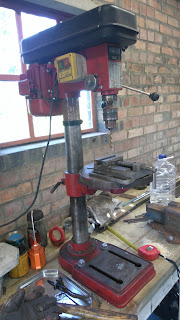 We then fitted a short locking tray to the RH end of the frame. This will contain the tappet blade for lever no.45. A bit more bracketry will be required to support this rigidly: 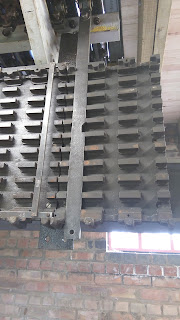 The next picture shows a length of point rodding attached to one of the angle cranks - this feeds out through to the front of the tunnel. With the rodding set horizontally, this allows us to check that the
height is right to allow for the fitting of the further steelwork for supporting the cranks which was will direct the rodding along the trackside. 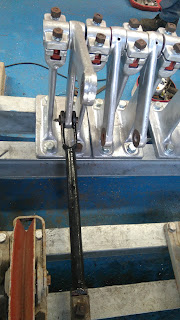 Finally, a few images of the S&T visit to the S&T dept of The West Somerset Railway last Saturday.
We started by visiting the signal box at Bishops Lydeard and then worked our way up the line to see the box at Crowcombe Heathfield, the box and works at Williton, and the box and works at Minehead
.
We arrived at Minehead just as a charter ( I think  from London Victoria ) pulled in to the station - a magnificent rake of Pullman coaches headed by a DB Schencker Class 59: 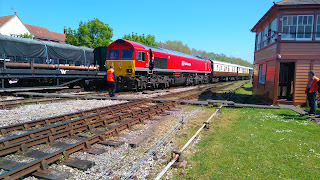 And on the return journey we stopped off at Blue Anchor box and posed for the group photo: 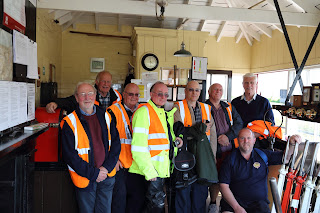 A bit more progress under the Box

Tuesday 10th May
Luckily we were out of the rain today in the Locking Room of Broadway box making further progress with the mechanical locking and drilling of the floor girders for mounting the signal wire wheels and point operating angle cranks. 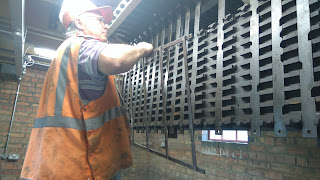 Here's Malcolm mounting one of the frames to the locking tray. These will retain the tappet blades (the vertical notched bars) and (eventually) the horizontal locking bars. A bit of a fiddle to fit, but again the 4 vertical and 2 horizontal pieces in each of 5 units had been match-marked (well most of them!) previously at Winchcombe. Some of these pieces needed de-rusting before fitting,
John and Martin (making one of his visits to the railway from Wolverhampton) set about drilling some more holes for the angle cranks in the floor mounted girders using the very handy magnetic base drill. These moles are clearance for 20mm dial bolts (sorry not quite heritage here - probably originally 3/4"BSW!) : 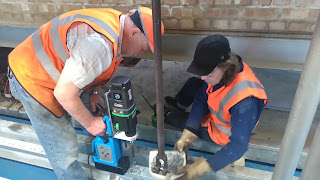 Here are some of the holes: 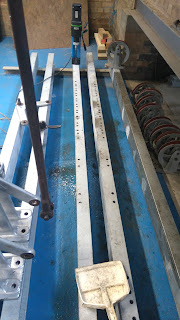 And here are the angle cranks fitted 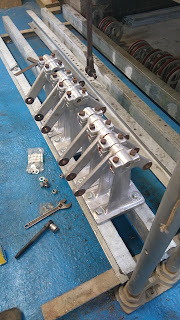 The angle cranks will connect to the lever tails above with long rods , you can just see one in the left of the picture showing the drilled holes above. This was hung from a lever to set the horizontal position of  the crank. Unfortunately, the connecting rods are not the correct length for this installation and will need shortening . Each end has a fork to take a pivot pin, so a section will be cut out of the centre and then the two parts welded back together.

A bit more drilling and fitting left for another day.

S&T Dept are off to the West Somerset this Saturday for a reciprocal visit at the invitation of their S&T to have a guided tour of their signal boxes, etc. An early start to be at  Bishops Lydeard for 09.00hrs !

Tuesday 3rd May
It's a while since Mike S gave us an update on his ongoing work with the GWSR communication system. We have gained a new recruit, Paul, whose background is in office phone systems - so straight away we put him to good use in the Stationmasters office at Toddington who were requesting a second, easier to reach, phone in the office. It was lucky that a cable route was seen which was nearly all on wood making the tacking much easier. Hope the staff can enjoy this new more convenient location.

The next task was in the Steam Dept signing on lobby where a new extension had been long overdue. A black  phone was chosen from stock for this as we thought the standard ivory would look a bit grubby before long!


To explain the above photo, we move  to Toddington signal box locking room where four of us are struggling to lift the 3cwt PAX (Private Automatic Exchange) telephone unit to enable a fifth volunteer to slide a repaired support trolley underneath. One of the original castors had expired, so all 4 have been replaced with heavy duty castors.
The reason for having this unit movable, I hear you ask?
Well, some very important cross connections ( jumpers)  are only accessible via the back panel and the trolley allows access all round whilst the unit can be stored close to the wall. This  gives better access to the mechanical bits in the confined space.

Work also continues on the new concentrator phone system. The one for Toddington signal box will be the largest capacity 15 SPT lines, that we have built so far.
We hoped to change this during July but preferring to err on the side of caution and knowing how critical these systems can be, we may delay it until we can see at least a two day gap in the running schedules. Even if this means waiting until the winter shut down.
This will then complete a series of four installations leaving only Broadway when the time is right.
This will be a completely new install- much easier than trying to keep two systems working together.
.
Each signal box will then have telephone concentrators which are similar in operation and appearance. 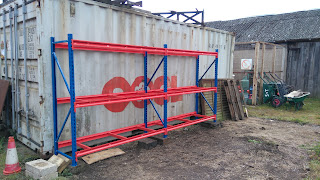 Finally, we erected a new set of racking up against the container in Winchcombe yard. We are going to stack 4 GWR motor point operating units on this. They are currently languishing on the ground out in the open by the MSC shed. One of these will eventually be installed at Broadway south near    Childswickham  bridge once it has been overhauled. Another job for the near future.