Not Quite There Yet

We were still slaving away at Broadway today to complete the installation of the point rodding up to the south pointwork. But I have to report that we have not got there yet.
We have been having a bit of a problem with our lengths of point rodding some of which are not particularly straight - so there has been a bit of juggling with rodding selection and stool positioning to get the layout looking presentable and functioning properly. On top of which we had to get the two sets of  compensators re-aligned - a bit of a jigsaw.
Anyway, at last all is OK. Here are a few pictures of the day's work starting with Malcolm on the end of a crowbar - this is quite an effective way of "wriggling" a buried concrete stool to make a small adjustment : 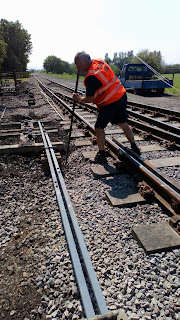 And then check that the distance is OK: 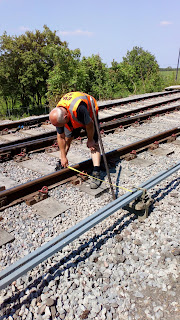 While Jim P and Len W connect the rodding to the compensators. The blocks on which they have been mounted have had the ballast shovelled back in so the system should be nice and stable. NB the wooden height gauge which is used to keep a constant height relative to the track. 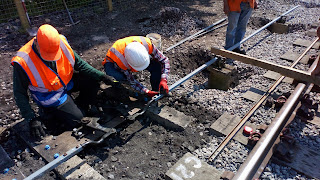 And here are the compensators all connected up and looking a lot tidier : 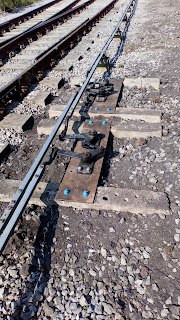 Then continuing on with the stool burying up towards the temporary ground frame. We shall carry on past this up to the point where the existing rods cross to the track. We  left ourselves with four more stools for next week and the burying of four more concrete blocks to take steel plates and angle cranks - these to be connected when the ground frame is eventually removed. 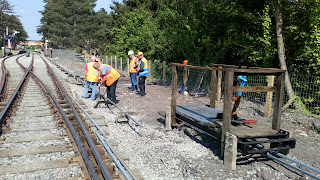 We were "double-headed" today. Another group of two stalwarts from the S & T Oiling Gang turned up for some greasing and oiling. They are responsible for lubricating all the moving parts of signals, pulleys, cranks, etc on the railway- now becoming a major task to keep everything in good working order : 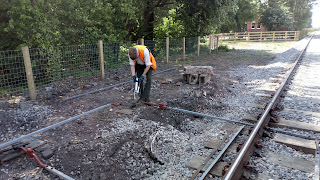 You will also see in the above picture one of the holes for the concrete blocks.


A grease gun poised to inject grease into an angle crank leading to the fpl. 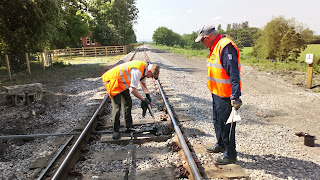 And as if we hadn't had enough excitement for one day we were alerted to the approach of the Gala Visitor 5197 pulling into Broadway Station. It certainly has a unique whistle and a certain presence.
It probably startled people standing close to it on the platform when it's safety valves lifted - guite a noisy blast!

I think it will be a star at the gala. 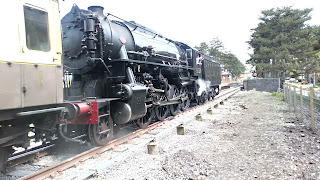