A clean and paint day

Just a couple of volunteers today confined to barracks at Winchcombe to do some essential cleaning and painting of fittings. As mentioned last week we have a series of electric locks to fit in Broadway box - the ones we have in stock need a bit of tlc. The covers have been wire brushed with an angle grinder and have been painted with red primer. After white undercoating they will eventually be painted "silver". 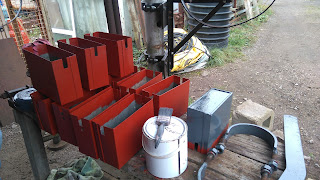 Inside our carriage "workshop" some of the back plates for the locks have been cleaned and under coated:

A miscellany of signal parts are also in various stages of restoration on another bench outside - some of these will find action at Broadway. The primed item in the foreground is a mounting bracket for a lamp case. 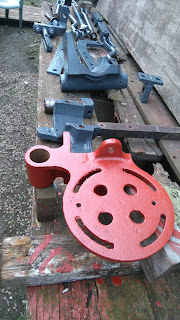 The finial which was removed during the re-furbishment of signal 3 at Cheltenham has now been cleaned and here it is receiving its white gloss topcoat - red centre section to follow - another part  for Broadway signals: 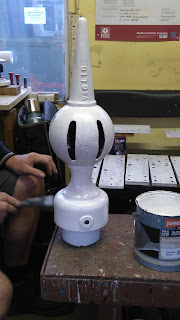 Talking of signals, we have received, courtesy of John S, a 20ft long wooden signal post which we are proposing to use for the starter signal at the end of  Broadway platform 1 ( near where the original signal box used to be adjacent to Evesham Road bridge). We believe it was rescued from a garden in Cornwall. It is quite a substantial piece of oak. It has some fairly serious rot at its bottom end so we are going to cut this out and insert a new piece and then fit a steel boot round it for support. Here is a sneak preview from  under the cover: 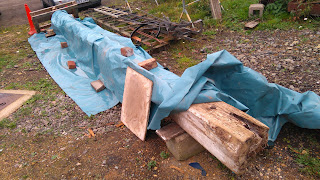 To round off the day Neil C and Richard C went over the tracks to fit replacement lights to both ends of the Baguley-Drewry railcar. Red LEDs on the right and white LEDs on the left for bi-directional Identification. Mechanical servicing still to be carried out but still looking excellent  after its C&W makeover 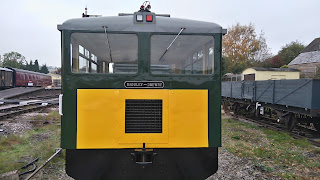 S & T paid a visit to Broadway today with the prime objective of removing the 38 pallets of cable troughing from the trackbed - the first stage of clearing up to prepare for ballasting. These will be temporarily stored on platform 2 each side of the signal box until they are installed for the cabling south from the signal box. Neil C drove the Telehandler from Winchcombe to achieve this task 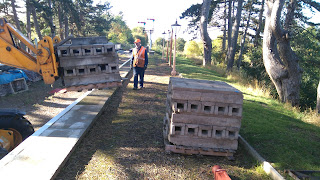 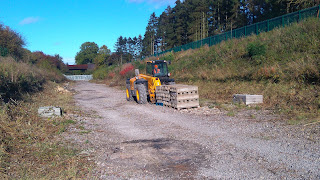 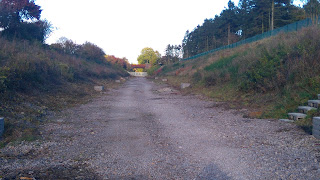 And  here are the re-located pallets in their new position: 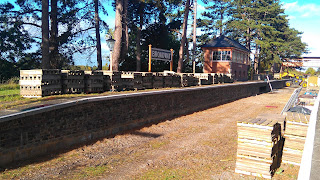 While this was going on Malcolm W was down in the locking room doing some trial fitting of an electric lock. Quite a lot of work still to do here. We need to make some couplings and pins to link the lower tappet blades to the locks. Some of the tappet blades will have to be removed for the drilling of holes to suit. I believe there will be 16 electric locks required. 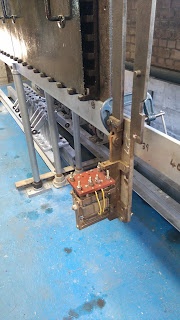 Richard C and Carl S took the opportunity to record some site measurements while all this was going on. This to determine the positioning of the 3 signals (this includes the route indicator signal which is currently erected in Winchcombe  yard) which will control movements at the northern end of the station. Hopefully once this is all agreed we can dig some holes and progress with setting the signal posts. The posts will be set behind the lines of the drainage pipes and cut into the slope of the edge of the embankment - this will include a concrete base and small retaining wall.
Out of interest, from the end of the platform ramp to the perimeter fence there is a distance of 330 metres (361 yards) in which to fit the northern track layout. Here's Richard C about to pace it out with the measuring wheel: 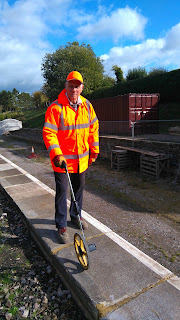 Hope Neil got back to base with the Telehandler without causing too much traffic congestion!

Five of us returned to Cheltenham Racecourse Station to complete the re-furbishnent of signal no.3 adjacent to the road bridge at the end of platform 1.  We borrowed one of the P Way trolleys to transport all the replacement signal parts and tools up from the crossing by the signal box. This was accomplished after the loco had run round with the first steam se vice of the day. No SPADs were reported!  -  here we are ready for action: 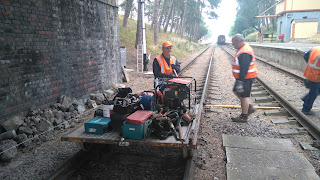 The signal post has already had its 3 coats of paint applied so the brackets for mounting the spectacle plate, detector, lamp case and signal arm were fitted at the top first. The down rod, balance weight assembly and angle crank followed at the bottom. The ladder had to wait for its top coat of gloss black (at the top), and white over the lower section. Here's Richard C putting the finishing touches to the ladder: 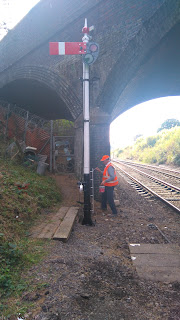 The temporary Ground Signal has now been removed: 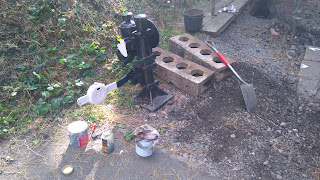 And will eventually be installed at the north end of the station. Unfortunately the heights of the signal fittings were not quite identical to the original settings so the two existing cables for the detector and lamp were short by about 6 inches so we had to "untrench" them to find a bit of slack. We were lucky! All are now re-buried and tidy. 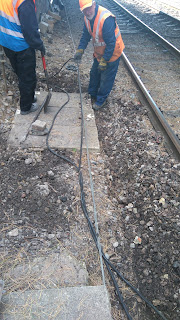 We managed to disconnect the ground signal and re-connect and test no.3 between trains so there was no disruption. Here' a view of the finished job: 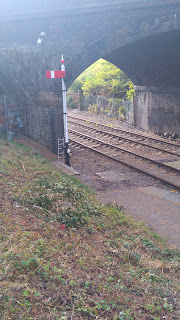 Meanwhile up in Hunting Butts Cutting the headshunt points were getting some attention. Any shunting of the stored sock on the 2 tracks has meant that the points have to be barred and clipped for
each move because the casting on the hand operated spring lever was broken. Here's the offending item: 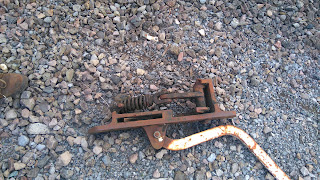 Neil C and Jim P spent most of the morning sorting this out and it is now fully operational
with a replacement assembly which has a pretty strong ' snap' on it. 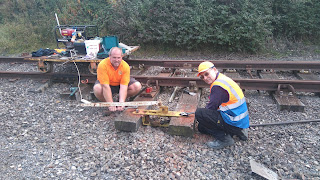