Is This a Record?

Sorry about the delay with this blog - too much Wimbledon, cricket, football, house decoration getting in the way - but better late than never.

Today was going to be a bit of a challenge. Not sure if the Guinness Boook of Records has any records relating to steam railways apart from Mallard - but try this one. The ground signal (yes, another one !) by the platform 2 starter signal at Winchcombe needed changing. After the first train of the day had passed there was to be a shunt of the parked rake in platform 2 into the carriage sidings 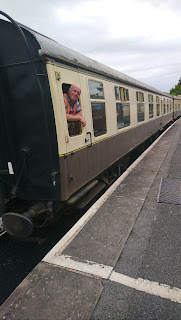 Malcolm was in the lead carriage as guard. Then a slow reversal into the siding 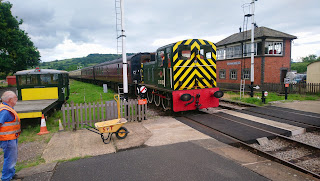 Then we leapt into action (not quite formula 1 pit change performance but not bad for two  elderly volunteers. This signal is mounted on a fabricated pedestal to improve visibility for the drivers. We dismantled as much as practical to make handling easier and then attacked the four  mounting bolts. So a quick unbolt (most bolts on heritage railways are not quick)

John P in the process of dismantling 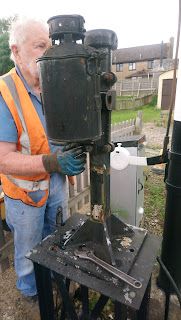 And the spare refitted and working just 1.5 hours later to perform the carriage shunt 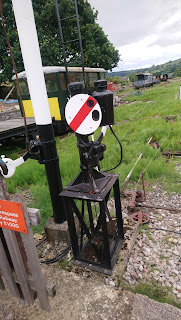 Since taking this picture the base has been cleaned up and given a coat of black gloss.

A lot of activity going on around us with the gunpowder van being meticulously prepared by C & W for a makeover. To be filmed by a model making company I believe. 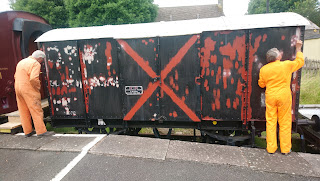