A smaller group of us at Broadway today to continue with the point rodding installation up to the southern points.
We finished setting in the last four stools up to the point and fpl connections. It has been slow going because the alignment to meet up with the angle cranks which will be set on the concrete blocks at the points has proved a little problematical and has involved the moving (by large crowbar) of the blocks holding the compensators that we buried last week! Anyway, after much grunting and groaning we have got the rodding runs looking respectable. Here's Carl S fixing the steel plate to the first set of blocks - the level of these will need adjusting once the angle cranks are fitted: 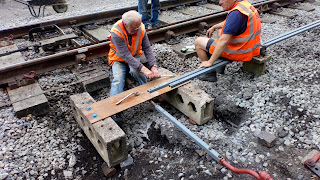 And here is the second set of blocks with steel plate fitted at the fpl connection.  Note that we can do all this without disturbing the existing connections from the ground frame. It should then be a relatively simple operation to eventually change over to signal box operation: 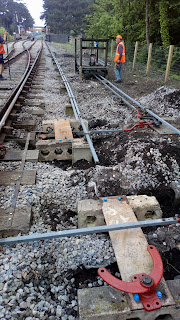 I don't think you want to see any more pictures of rodding today, but just to finish off here is a close up of a roller assembly on which the rodding sits. This enables the stub shafts to roll rather than turn therefore minimising friction: 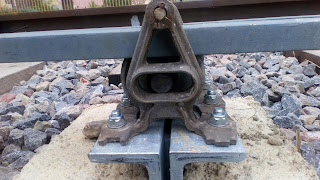 A signal wire has now been connected from the signal box to the wooden Post (platform 1 starter - lever 7) to check the clearance with the platform 2 ramp brickwork. It's all a bit tight here and may need a bit of brick "pruning" - anyway it works OK and we tried it out on Oliver Cromwell! 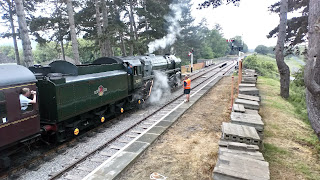 And the wire being diverted under the tracks by the pulley at the base of the bracket signal: 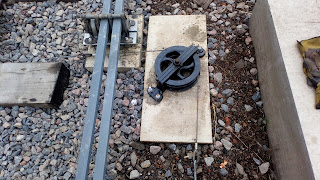 We were treated to some excellent views of both Oliver Cromwell and P & O coming and going today. 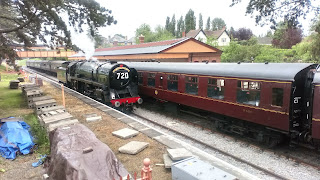 And P & O running round 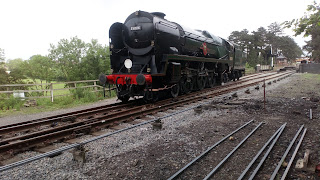 A fitting wind down from last weekend's Gala!