Only four in today - quite a contrast to last week, so an opportunity to crack on with a few jobs in Winchcombe yard.
One of which was to move the preassembly of the CRC bracket signal along a bit.
Because we are using a cut down section of the main structure a new plate needs fixing to it for attaching the support strut.
Malcolm sets to with the hole drilling: 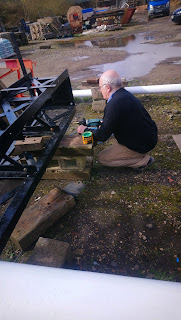 The support strut positioned after some adjustment to get the clamp casting seated correctly on the post. 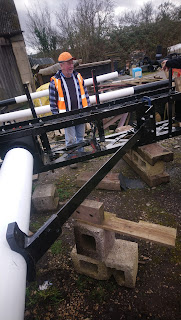 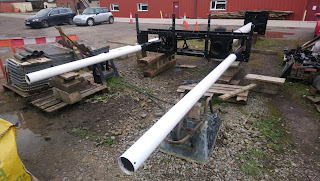 (the dolls are actually parallel - the direction of shot seems to have given the wrong impression!)

Today's other task was to re-assemble a crows nest now that it's component parts have been repainted. We only have one other spare one so this will be a welcome addition to our stock ready for the re-furb of the next signal.
To make life easier for fitting new boards we have bolted it to a post which currently holds up a lean to by the MSC shed. 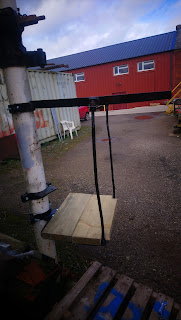 Carl S is doing the woodwork 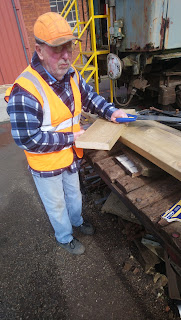 The final bolting down of the boards will be done next week - we have left them soaking in a bath of creosote to give them a better life expectancy.

Nine of us in action today with the main objective to install cabling and re-bond the rails over Stanway viaduct.
Luckily the diesel railcar has now been serviced with its new brake blocks fitted and fuel and air systems functioning properly - so here we are ready to go with two cable drums loaded. 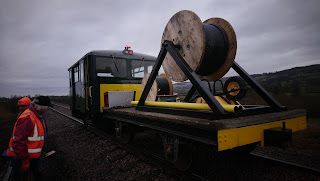 Before we can fit the new bonding wires we have to knock out the old pegs. The old bonding wires were chiselled off flush with the web of the rails before the rails were lifted. These pegs have been hammered in and need some serious "hammer and punch" to get them out. We are not considering drilling new holes because this section of rail is manganese steel which is notoriously difficult and time consuming to drill.
Malcolm W and Jim P do the kneeling : 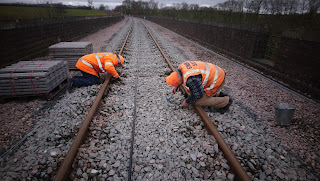 I think there were about 15 panels to bond which means 64 rail ends to deal with with two pegs in each.
Having got all the old pegs out, new bonding wires are threaded behind the fishplates (keeps them out of the way of damage from tamping) and bent into the holes with new pegs then hammered in: 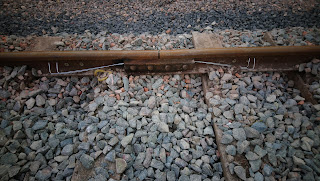 While this was going on the rest of the team busied themselves with cabling matters.
The re-furbished cabinet at the middle of the viaduct  has been re-mounted - this position feeds an end of a track circuit so a protective yellow tube is put in under the track to protect the cables : 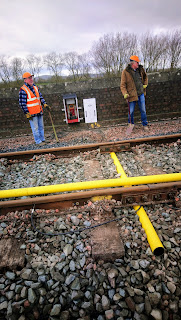 And the railcar is used to run out the cables. One is a 20 pair which is the main connection between Toddington and Broadway. 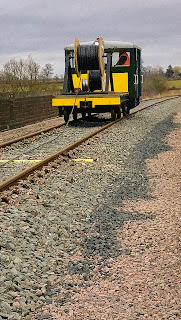 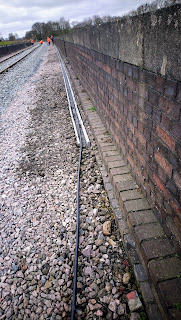 And has been left on the sleeper ends ready for burying 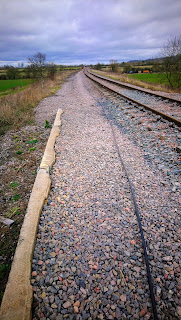 Then follows a good workout putting the lids back on the troughs - about 250 of them in all. 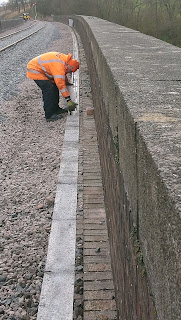 We were fitting these from both ends and I was expecting an overlap or gap in the middle requiring stone cutting but miraculously they mated up exactly.

Neil C has done most of the connecting up in the cabinets so we should be OK for running on Saturday. Here he is in deep connection mode being assisted by John B 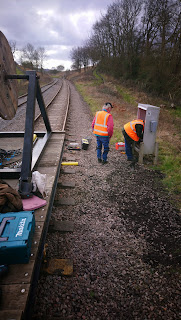 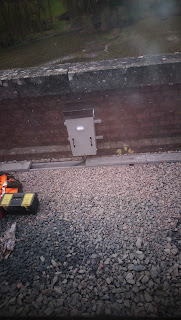 It's unusual looking back towards Toddington here with the North siding empty. Vision of a double track railway!

The final tidy up to load all the old cable (cut into manageable lengths) and offcuts onto the trailer and then back off to Winchcombe for a cup of tea. 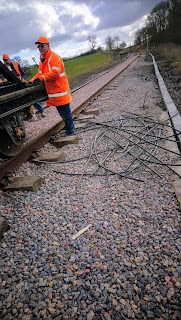 One of the advantages of having the railcar in use out on the line is that we can boil a kettle on a camping gas stove out of the wind - so we weren't without sustenance!