A Change of Direction

We have decided to pause our efforts going South with the rodding - we can't do anything meaningful with with the setting of the cranks on the blocks that we installed last week until the connections from the ground frame are temporarily disconnected. So the grand plan is to do this next Monday (a non-running day) . We will then re-connect the ground frame (having checked that everything works from the box) leaving everything ready for connection to the signal box at a later date.

In answer to one of the questions to the blog last week regarding the positioning of the rollers that the rodding moves on. After several pulls on the levers it appears that rollers (having random positions in their slots initially) all adopt the same position along the run - so a pure rolling action of the roller stub axles in their slots is achieved (ie much reduced friction).
However, the Eagle eyed  observer will note that some rollers do not adopt this regimented position - this is because some of the lengths of rodding are not perfectly flat which means that some rollers do not make contact and do not move!
Similarly, some of the rodding lengths are not perfectly straight laterally which may result in contract with the sides of the rollers - so a certain amount of friction is unavoidable.

Anyway, enough of this roller talk and back to today's activity.
We are now marching northwards with the installation of stools. These have now morphed into the four wheel variety : 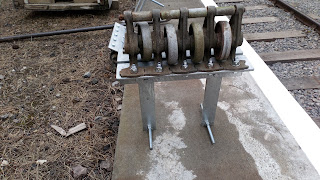 Quite a lot of time spent bolting the rollers onto the bases. Each set has 10 bolts. The bolts we happen to be using are a bit longer than they need to be so the winding up of nyloc nuts is a bit labour intensive- but very secure.

Here's Peter B our American volunteer from Hawaii (the current volcanic activity is not on his island) - over here for the summer, having a good workout with the spanners : 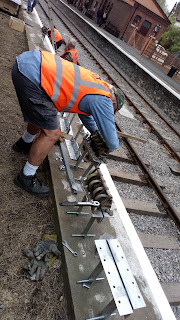 Our logistics for concreting today left a bit to be desired. We manhandled many barrow loads of aggregate from the back of the pickup by the station to a pile at the end of platform 2. A barrow crossing needs  a Barrowcrossing: 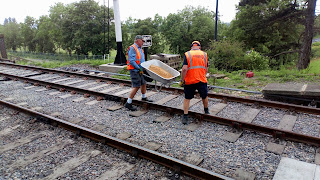 Concrete then mixed with a very temperamental petrol mixer
which somewhat hampered our progress today: 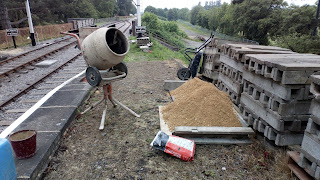 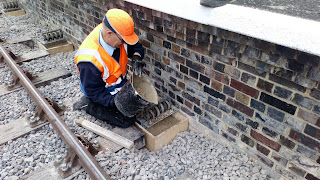 We managed to complete six stools today with a further three ready for concrete - so a modest start. 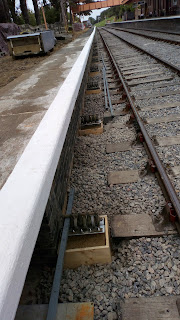 We were treated to KEII twice today with  well populated carriages: 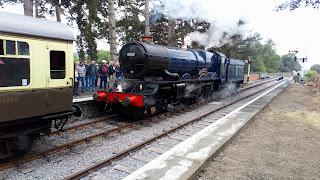