A brief report today. Two signals at Toddington in need of a bit of TLC from us. The starter signal (no. 25) has to have its temporarily repaired down rod replaced and re-aligned so that it runs smoothly through its guide brackets up the post. This also meant moving the balance weight arm and angle crank round so that all components line up correctly to enable smooth movement. Malcolm did the scary bit up top to unbolt the down rod from the spectacle plate and then lift it clear of the brackets. It has to be lifted out vertically and you end up with several metres of wobbling  steel rod to be manoeuvred down to ground. 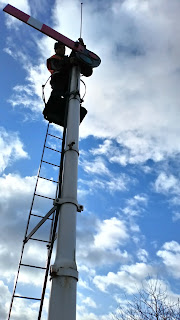 John P and myself stayed down below to do the dis-connecting an re-connecting: 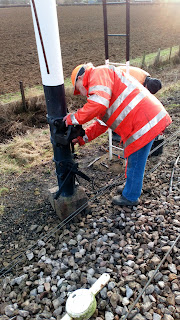 The trouble with slackening off the clamps and moving the fittings, it is difficult not to damage the paintwork so we will have to re-visit with a wire brush and some paint. 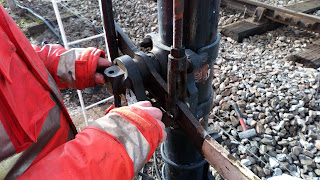 The other signal requiring our attention is the double disc ground signal between the tracks adjacent to Toddington Signal Box. This has now been disconnected and transported back to Winchcombe for re-furbishment. It's lamp cases and discs are in a poor state, so it will get a complete dismantle, clean, paint and re-build. Some of the bolts need a deal of brute force to undo and the balance weights need sustained  blows from a sledge hammer to get them off. You could argue that the balance weights could be left in their corroded-on position but it's nice to have everything working properly!
Here's Carl S. wrestling with the bolt holding the balance weight in position - it came out eventually without shearing off! 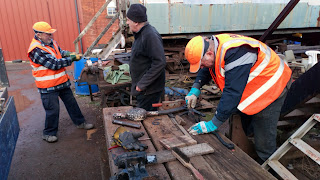 While Keith L scrapes away close by to remove years of grime and grease from some of the fittings.