No, not workers, I meant working lines! The two PAX exchange lines for Broadway Todd 43 and 53 are now commissioned after a deal of difficulty. For the strowger nerds, each FS number is associated directly with a pair of  600 type relays, L&K. Normally by strapping to adjacent tags but as they fail, it is less damaging to our ancient unit  which was build in 1965,  to cross connect  ( jumper) over to a  spare pr of relays whenever we can. Unfortunately one of the two legs going to the MDF was  incorrectly terminated on the number we had chosen to bring into use and it caused much head scratching until I used one of the new LED working lights to actually see what I was doing. Voila fault found!.

I didn't mention it before but last week Paul and I were at Toddington installing  computer cabling for faster  credit card machines rather than the old Dial-up ones that we started with. I gather that Neil has now completed the terminations.

The new concentrator, again for Broadway, is now completed and tested.
Here I really must say a big THANK YOU to Colin at Time Sync Controls in Banbury who very kindly built and donated a new Power Supply for these units. 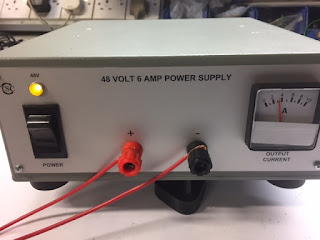 Poor old Kevern was very frustrated when the  test PSU died on him but now, thanks to Colin, the job has been completed and will now be soak tested  before installation in the new Signal Box. This is the last unit in the complete rebuilding of all 5 units so all the Signal Boxes Concentrators look in-period and work in exactly the same way.