Tuesday 9th Jan
A good turnout today with 10 of us in action.
The main task of the day was to re-build the ground frame that will be installed temporarily to operate the points at Broadway South. This is the frame that was previously doing service at Laverton and has since been dismantled and stored in various locations at Winchcombe.
First we have to extricate the base (a heavy lump)  from the back of the yard with the aid of the telehandler at maximum reach : 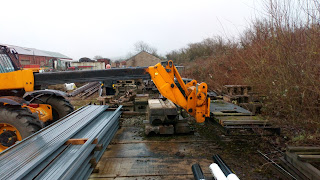 Then mount it on two concrete blocks to fix in the two levers in position. The blue/brown lever to operate the FPL and the black lever the points: 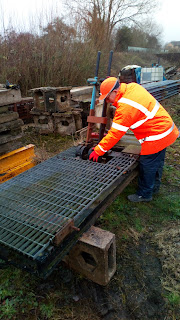 Then attach the lock which prevents the FPL lever being operated. This can only be released with the staff carried by the train crew when operating. We have a key which we can use to make sure that the system functions OK. It all works well. 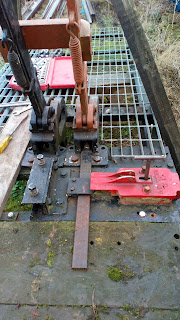 Now we need to fit the  rails. The two  top rails appear to have gone missing so two new ones have been screwed on. The two couplings sitting on the walkway will attach the bottom of the levers to the rodding: 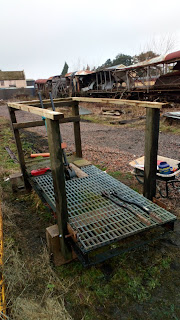 A coat of creosote finishes the job off. 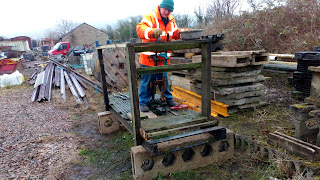 We hope to transport this assembly as it is to Broadway on a pickup and get Steve to lift it off with his JCB. While it is up in the air we will attach four concrete legs and then lower it into prepared holes in the ballast. These are two of  the concrete "legs" which will support the frame approx 15" above ground level. A step or steps will be required : An update with the cabling required between Toddington and Broadway.
A 20 pair armoured cable is required to carry all the necessary connections for signal lamps, repeaters, track Circuits, telephones, etc. To protect this cable Steve has been busy excavating a shallow trench between the aqueduct and Laverton to install the next length. These lengths of cable correspond to the lengths of continously welded rail each section of which will be track-circuited. The opportunity was taken earlier (last week before the trackwork south of Toddington stopped us getting through) to spool out the cable between the tracks using the diesel railcar with the cable drum mounted on a flatbed.  Life made easy here: 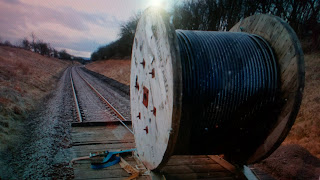 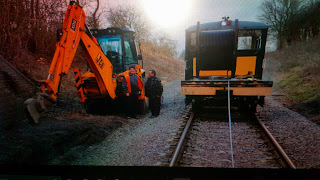 So today, Neil C, Carl S and Keith L were despatched to lift the cable from the four foot into the trench and instal a lineside cabinet at the end of the run. I believe Steve followed on with the JCB to perform the burial.
There will be two more lengths of cable to dig in before Broadway is reached and communication can begin. Sorry no photos of the burial and cabinet installation, but I did get a shot of it after Len had attached the legs before it was carried off from Winchcombe 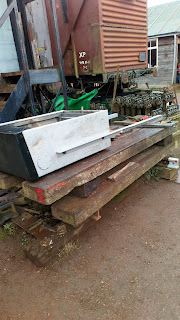 And to finish off today, a piece of kit that you would not associate with phones. Mike S and Paul are in the process of installing a phone at the crossing at the south end of platform 2 at Toddington. This piece of rail we heaved out of the yard will do nicely to mount it on and will match one on the opposite side! 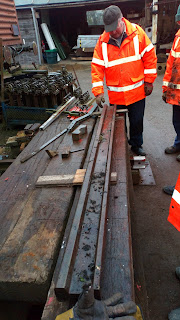 I believe that whoever turns up on Thursday will have the job of cleaning and painting it!

We spotted a coach passing by in Winchcombe yard this afternoon. Being delivered from the Avon Valley Railway 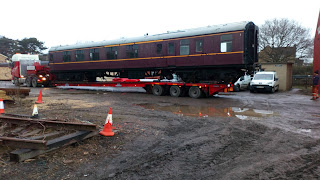