Six of us at Broadway today to progress the fittings on 3 signals and to deliver the final piece of the locking tray that we have now acquired. Locking activity is for another day 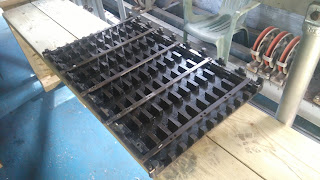 To be fitted here 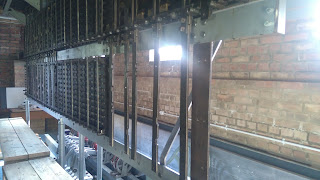 The Route Indicator signal was our first destination to remove the shuttering round the concrete slab that has been constructed to mount a ground signal. We were impressed with the track that has now been laid and clipped as far as this signal - things are moving  a-pace, points next 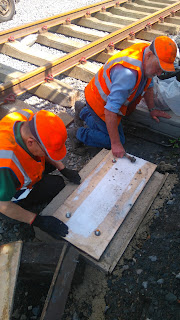 This signal is now essentially complete except for its lamp casings and the frosted glass diffuser.
Quite a bit of paint chipping has occurred during its transfer from Winchcombe and assembly so I spent a while touching up the , mainly black, paintwork. 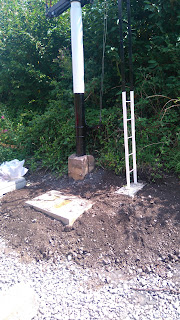 Then over to signal 39. Quite a lot to do here. Firstly to cast a concrete block to secure the base of the ladder.  Jim P is puddling the concrete that has been mixed by Keith L in a wheelbarrow 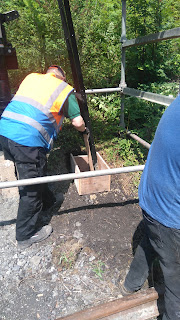 Then the mounting of the ground signal on its elevated mount - this will provide good visibility for the drivers. The disc is going to be approx 5 ft above ground level (perhaps not a good idea to call this a ground signal!)
Before fitting : 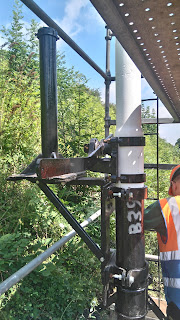 And a couple of shots after assembly . Note that the front disc still has to be fitted, we will leave this off until a future date. Also you  may have noticed that we did not realise, because we were using the bracket to mount the ground signal,  the length of the black portion on the post was insufficient - this has been rectified and everything is now black up to the upper clamp! With hindsight, the length of the larger diameter of the post could have been a little longer to give us a bit more leeway for juggling all these fittings - but it all functions and looks good: 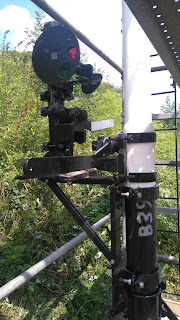 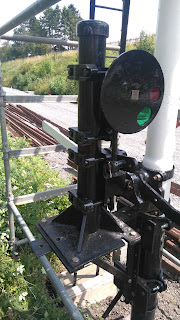 Then off we went to our pride and joy - the wooden post - now firmly secured in its concrete boot. The ladder has been fixed at the top with its rather unusual configuration : 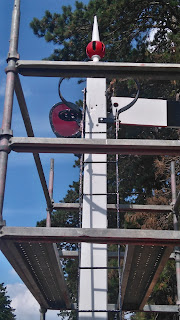 And at the bottom with a some concrete 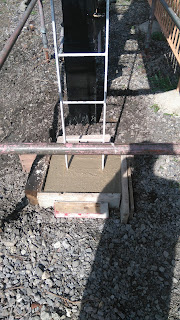 We had time at the end of the day to put some undercoat on areas of the paintwork  that had been damaged during its rise from obscurity  and it will get a final coat of white gloss next time.

Round the route indicator signal and number 39, nature is rapidly encroaching so John P felt in an attacking mood and had a go at clearing some of the growth 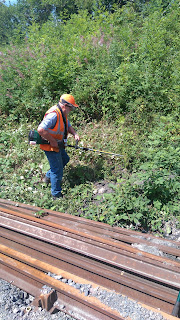 The track in the foreground will probably be sitting on sleepers by the time you read this!!