The end of the Rodding

Confined to barracks today. Decided not to go to Broadway because of the wet forecast. So it was an ideal opportunity to put an end to the damned rodding. Just 3 lengths left to clean and paint 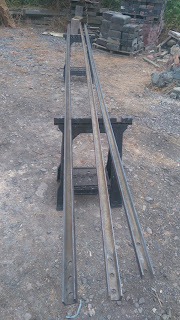 And then add to the pile stored on the concrete slabs. 138 lengths in total. We'll now see how the zinc paint stands up to the elements - it will still be a while before they are transported to Broadway.
It's a relief to have them all complete and to have some space in the MSC shed to swing a cat! 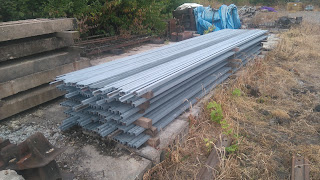 Meanwhile there was activity on a couple of additional parts required for the recently erected wooden  signal post at Broadway. The ladder and its safety hoop. Carl S and Peter B attacked this with the angle grinders with wire brushes  to remove the old paint as it was in rather a poor state - quite a fiddly job to manoeuvre round the rungs. 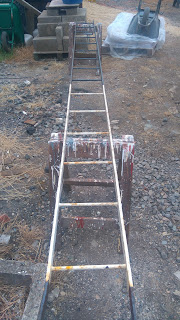 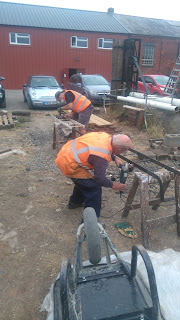 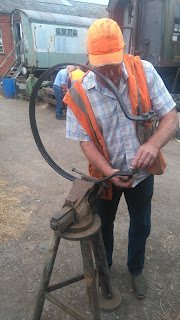 Talking of heavy stuff, two  of the large lumps required for Broadway north are  the buffer stops which are presently on the ends of the rails in the yard at Winchcombe opposite the Carriage and Wagon works. One of them was accessible for Steve to drag out with the Telehandler together with all the undergrowth that has sprung up round it: 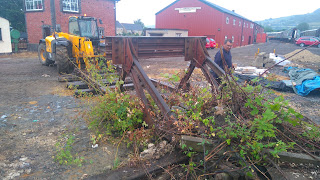 The second one will require a bit more ingenuity to get out  because it is up against the rake of "high class" rolling stock on this isolated siding - probably will need a length of temporary track laying to move it all up to get access. I believe the objective is to get them trucked up to Broadway tomorrow.