Off to Broadway again today with only a small turnout. Three of us to start with followed by Steve with his JCB and Neil C after lunch.
We started off at the Route Indicator signal at the north end having loaded the pickup with a heap of aggregate, cement mixer, wheel barrow, cement, etc 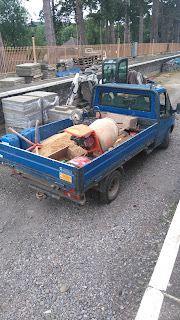 We are going to instal a ground signal adjacent to this signal, so a concrete mounting block is required. Some shuttering had been pre-prepared and was positioned after levelling out a base 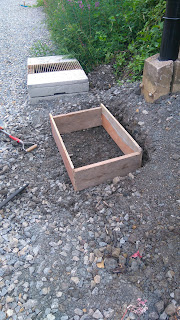 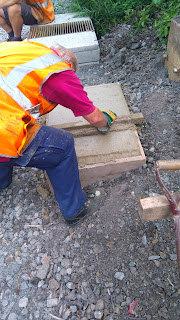 And then pushed in a template holding four mounting studs. We'll remove all the woodwork next week when the concrete is well set. 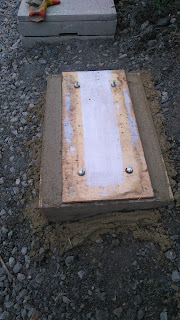 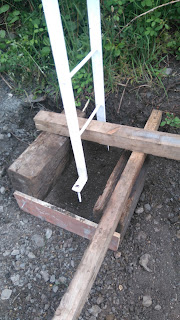 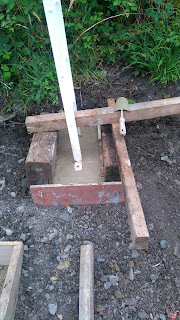 The signal at the end of platform 2 was noticed to have a bit of a lean so we took advantage of Steve and the JCB to give it a pull. He managed to hook his bucket onto the top of the concrete boot while we tamped some ballast in at the back. It now looks perfectly upright. 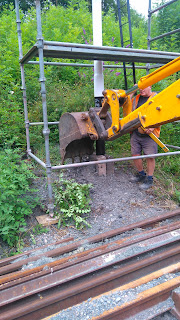 So. now onto the main event of the day. The planting of the wooden signal post at the southern end of platform 2. A task made relatively easy with the aid of the JCB. First stage to dig the hole - about 4 ft deep 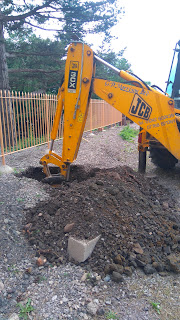 And then lift the post horizontally from its resting place on platform 2  to position its base adjacent to the hole. Then a bit of re-slinging to hoist it up to vertical 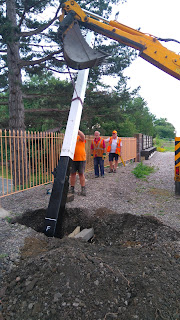 and manoeuvre it into the hole followed by numerous barrow loads of concrete. 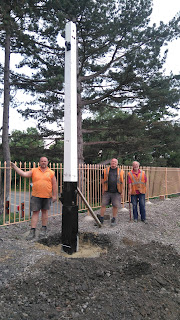 And posing for the team photo are Neil, Malcolm and Carl.
I think we got it in the right way round and it looks pretty vertical - let's hope it doesn't move before the concrete sets!!