Just three of us off to Broadway today to progress the fitting of some of the remaining parts to the Signals Numbers 38 and 39 at the north ends of the platforms were first. The penultimate part to fit to number 38 (platform 1 side) was the angle crank which is clamped to the post at the bottom. The down rod which connects the balance weight arm to the spectacle plate at the top still has to be completed (we have the length measurement for it - fine adjustment will be taken up by a screwed adjuster on its lower end) 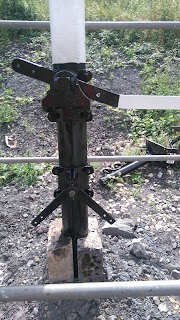 Then over to number 39 ( these numbers refer to the number of the lever in the signal box - number one starting nearest the door). Now this signal is another kettle of fish and we needed several attempts to fit everything on at the bottom end. Apart from the balance weight arm and the angle crank there is a large bracket on which a ground signal will be mounted: 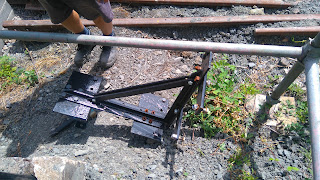 Once clamped into its preferred position we had a fouling problem with the angle crank - a small corner of the bracket will have to be removed by angle grinder next time - otherwise it all just fits. We measured the length required for this signal's down rod which we will configure back at base. 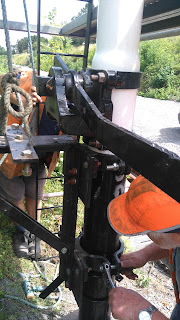 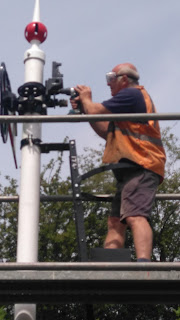 After lunch we headed southwards to the wooden post south of platform 1 to fit its spectacle plate, ladder, finial and down rod.  The down rod fitted beautifully and was adjusted to show a nice horizontal arm. Here's John P viewed from above making the final tweak 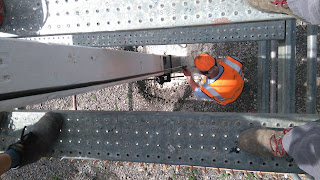 And a view from a distance 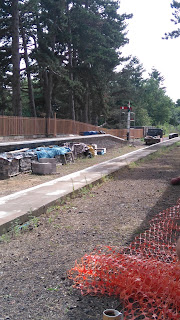 A bit more work needed to finish this signal off yet. A trial fitting of the lamp case behind the spectacle plate reveals that we need to make a spacer to bring the lamp lens to align with the centre of the coloured spectacles.

And finally a view of number 38 with the scaffolding removed - bit of a weird angle but I assure you the arm is horizontal! 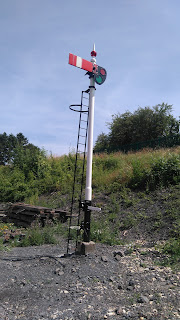