You may remember from last week's blog that we had an eventful  wrestle with the turnbuckle on the detector rod at the Winchcombe PWay yard points - so this week it was decided to replace the ground signal controlling these points - it has shed most of its paint and is in a rather sorry state.

So here we go with  John P and Malcolm W - luckily most of the bolts yielded without too much drama. 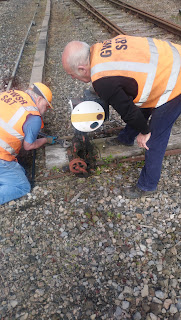 And a barrow load of bits: 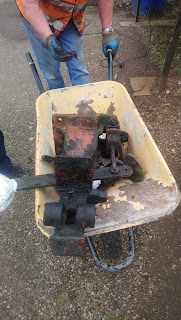 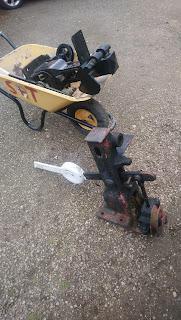 In order to fully dismantle, the balance weight has to be removed from the arm. To do this the securing bolt has to be removed, but you may have noticed in the above picture that this bolt, at some point in the past, has been sheared off. Attempts to drill it out failed 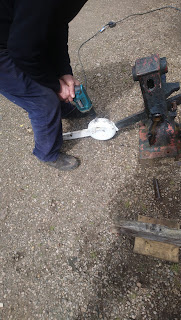 So we resorted to more serious tactics. It came off quite easily using a sledge hammer!! Luckily we have spares of these 20 pounders. 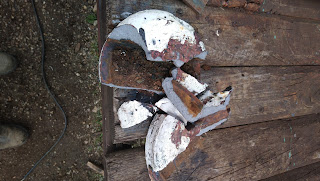 So off to the metal skip with the bits.

The re-conditioned signal was put in position and secured to its sleeper with four new coach screws (the old ones were suffering some serious rust). 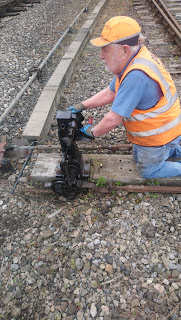 Since we have been able to come back in limited numbers on any one day we have spread ourselves over several days so there is a bit more continuity.