At Last an Update

Thursday 28th March.
Sorry about the radio silence for the last few weeks but I have been laid low in Worcester Royal Hosp having some serious surgery. But now on the mend and hope to be back in moderate action before long.
In the meantime, to bring you up to date with some of the S & T activity here are some notes and photos courtesy of Neil C.

Tues, 5th March
The facing point lock crank for 12B points was re-installed at Toddington. This was removed whilst P Way replaced the ballast and sleepers. Also note the replaced tie-bars at the ends of the sleepers to make sure that the FPL sleeper cannot alter its position relative to the Fpl stretcher itself. 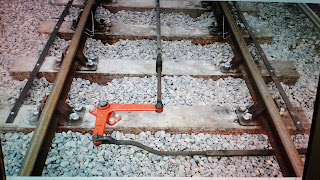 Next was the re- installation of the crank that drives Toddington points 14. Again removed whilst the track was re-laid through where the rodding run went. 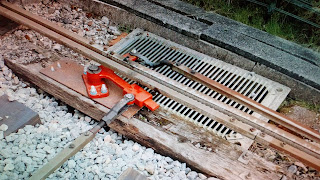 Note that the fixing timber, whilst a bit second hand, was basically sound. The only rot was where the crank sat on it. Malcolm sorted this by fitting a steel plate to span the crack.

Thurs 7th March
Next photo shows George and Andy fitting chicken wire to the board crossing. 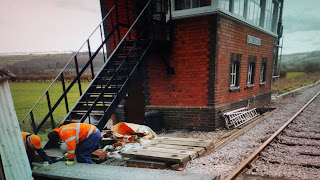 The crossing was re-fitted by John Carl and Jim on Tuesday. In this photo you can also see the new signal box windows (still to be painted)  and the troughing run heading into the distance.
The troughing was installed on Tuesday by Malcolm and Keith with help from Jim George and Carl. Also on Tuesday Peter and Neil finished off the bonding of the re-laid track, reconnected and tested the track Circuits and re-fed the signal lamps on the bracket signal.

Thursday 21st
Neil, Malcolm, George and Andy went to CRC and Gotherington and did a few remedial jobs, tidied up the locking rooms and carried out the annual signal box examinations and six monthly point checks.

Tues 26th
Jim, Peter, George, Carl, Keith, Malcolm and Neil were at Toddington all day. Neil was working recovering a small lineside cabinet from the south end of Toddington site. The cables from this were re-jointed  in the remaining cabinet 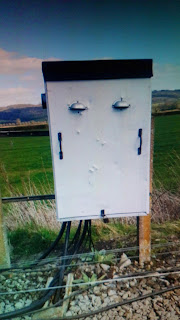 The rest of the gang were working on finishing the troughing run from the signal box to the south turnouts. All on site troughing is now laid out - we require approx 65 more pieces to complete the run to the furthest turnout where a new point machine will be installed : 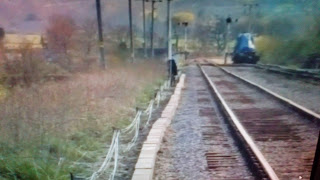 Two new signal wires were run out (showing slack in the above photo) - these will operate two new disc signals allowing access into and out of the yard at the south turnouts.
Malcolm took measurements under Toddington box for the installation of a large electric lock on lever 7 for the new turnout operation.
Neil later fitted one of the safety bars to the signal box window that is used for token exchange. The new windows are still to be painted - the remaining bars will be fitted later 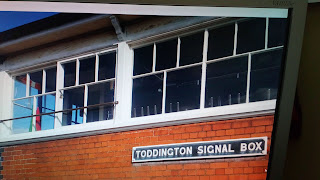 Wed 27th
Neil and Malcolm want to Broadway and fitted the top fittings and ladder to the distant signal. This distant will be machine operated in the fullness of time but for now will be fixed at caution 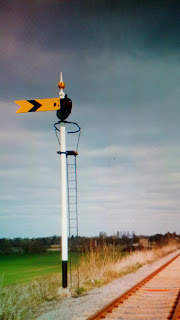 Thurs 28th
Neil, Malcolm, Andy and George will be test fitting the mounting parts for the electric lock for Toddington lever 7 and carry out the box and point examinations.

PS Some shiny new steps have appeared in front of our "workshop"!! 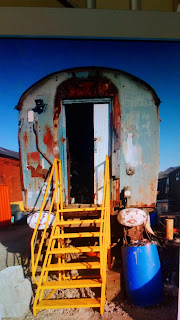