Its not only Golf that spoils a good walk!

No blue sky pictures to show- we were too busy checking out the Signal Post phones prior to the start of the season, but it was still a lovely day out in the sunshine.


Three of us, Kevern Paul and I ( Mike) met at Racecourse to make an early start. Visiting each Signal Post phone in turn, checking that its in working order both for calling and responding and recording the physical state of each one along the line.
At Racecourse the phones were soon done but  the Programmable chip that generates the ringing tone had died so although everything was working- it didn't sound like it was! This is the sort of fault that can cause misunderstandings leading to bigger problems so we were glad to have found it.
Kevern was confident that he had a spare chip handy. So we left him in electronics mode 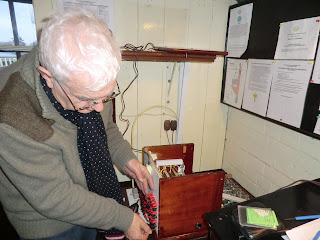 But thats when it gets complicated. The box to box circuit goes thru Gotherington but can only be accessed there when the Box is in use- so to check it properly we had  to split up and play leapfrog. Paul went  to gotherington, switched on  and spoke to Racecourse he then left to go to the signal at the start of the loop (S20)  I also moved to Goth tested S20 with him and track walked to Signal 2 by Skew Bridge, in the meantime Kevern had moved to Goth and responded to me  before he left for Winchcombe Box. I returned to Goth  box and spoke to Paul who was by then at Winchcombe Box before he walked to the Outer Home ( Chicken Curve) I  switched Goth off so leaving him to  speak to Kevern at Racecourse.  This is the first time that we have pre season checked both the long and the short circuits between the boxes. Glad we did, we Know its working ok. We are always grateful to Brian for his permission to drive across his goods yard- what a scenic spot it is!


After Lunch at Winchcombe we then repeated the leapfrog game at Toddington. I walked to the Stanway Viaduct; Paul started south at the Outer Home. Eventually we met up and went for a well earned tea break in the summer sunshine. We seem to agree that both Paul and I walked nearly 3 miles each- it certainly felt like it!

Mike S
PS We didnt actually get to Tunnel Sth  but its a nice spot and we promise to do it when the DMU can give us a lift.
The pic was not taken this week- we certainly didnt need winter coats- just Hi Viz !