Six of us off to Broadway today to do some preparation work for the burying and troughing of the armoured cables that run from the signal box along platform 2 up to the North end signals and finishing at the direction indicator signal by the North headshunt.
It has been decided to bury the cable in a trench along platform 2. To enable this we require access for a small mini-digger. At the moment there are several large piles of bricks of varying descriptions in the way so four of us set about re-locating them on pallets in a less obstructive position.
John P and Carl S make a start: 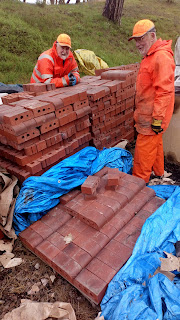 This occupied us for most of the day until we achieved a suitable access gap from the edging slabs: 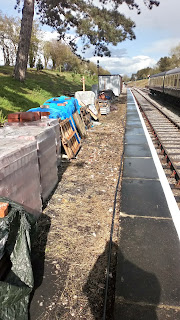 Malcolm W and George B attacked the laying of the concrete cable troughs starting at the line-side cabinet adjacent to signal 39. The troughs had previously been roughly laid out where they were thrown off! The layout of the ground and the concrete mounting  blocks do not allow for a very neat alignment without a huge amount of digging.

Some excavation required at the cabinet to level up with the cable exit pipe: 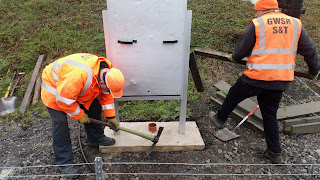 but here is the end result looking north: 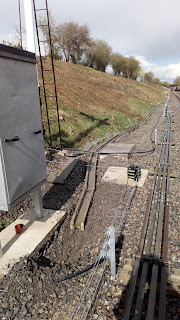