Malcolm (the boss) is away on hols this week so we have been left a list of things to do.
So, a good turnout of 7 of us at Broadway to tick some boxes.
Four stalwarts set out to dig out and barrow some of the loose soil and small gravelly ballast from beyond the signal at the top end of platform 1.
The purpose of this is to infill round the concrete blocks on which the cranks are mounted. As it rains this will get washed down through the larger ballast and consolidate the packing round these blocks so ensuring that they can't move.
Steve and George having to carry a barrow full across the tracks: 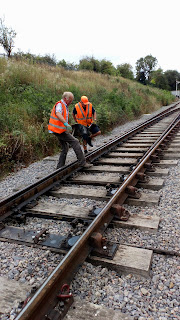 And then deposit it round the blocks: 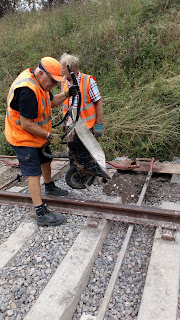 Looks a lot neater now that everything is levelled off: 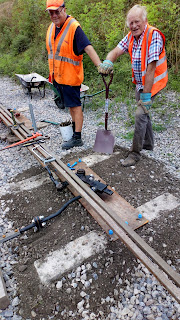 As mentioned last week the stretcher bar which the fpl controls at the North siding points still has to be fitted. But before this can be done a bit of rectification needs to be carried out to straighten the end of the point blade - it doesn't seat correctly against the adjacent rail. So, bring on the heavy mob!
Neil C has brought this natty set of hydraulic jacking equipment to try and bend the blade a bit. There is a block of wood between the blade and rail (on the lhs - which you can't see) to act as a cantilever. Then pump up to 10 tons and leave for a few minutes. This was repeated 3 times.
Gap now a lot better: 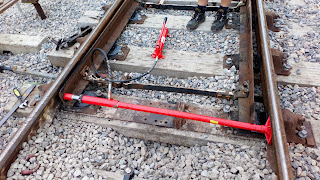 Now the stretcher can be fitted. The following picture shows the bolting arrangement of the insulated joint on the platform 1 side. From the top of the picture coming down from the blade is a thick steel spacer followed by a plastic insulating shim butting up to the stretcher. On the other side of the stretcher is a second plastic insulating shim with a thin steel plate  butting up to the nuts.
The bolts are sleeved with a plastic tube to insulate them from the metalwork: 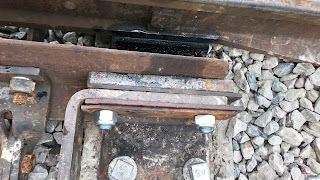 The stretcher bar is attached to the opposite blade using metal shims to maintain the correct spacing: 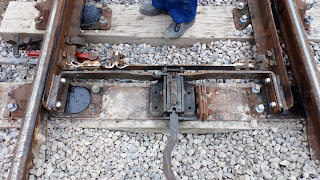 Unfortunately, with the fpl lined up with the locking slots in the stretcher the base of the fpl fouls by a small amount  on the joint in the baseplate. In a previous life these components probably didn't live together. The solution will probably be  to slice a little off the chamfered base of the fpl. We don't want to weld and re-slot the stretcher.

The stakes for the signal wire pulleys have now been set and concreted in alongside the rodding runs on the siding side: 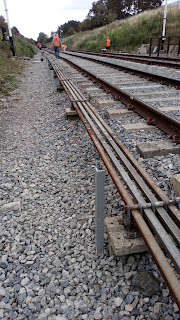 And the supporting roller assembly for the rodding in the signal box tunnel has been wrestled into place.
With the lengths of rodding now in a settled position there is a bit of rubbing on the slots cut in the wooden "rabbit proof fence" - so a bit of easement required! 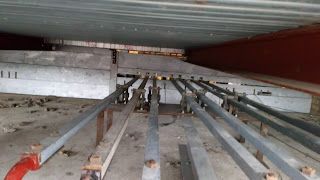 John P hoping to drill and bolt down to the concrete floor this pm
(I had to depart early so got no pictures of this - will report outstanding observations next week!)