Seven of us in attendance at Broadway today with the focus on pulleys and concrete.
Firstly the usual moving of several barrow loads of aggregate from the pickup to the pile at top end of platform 2 ready for mixing. 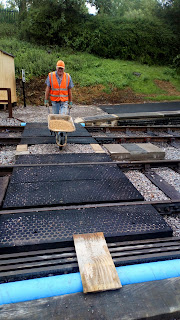 We need a fairly substantial block of concrete at the base of signal no. 39 (northern starter into platform 2) for signal wire pulleys. Peter with one of several barrow loads of concrete: 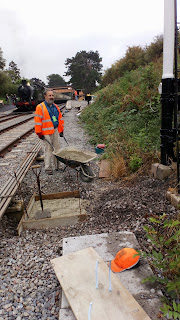 A three wheel pulley set is required here. One wire will operate this signal, one will operate the shunt (ground) signal attached to the post of no. 39, and one will direct a wire across the tracks to operate no.38 (starter signal into platform 1). The positioning of this is fairly precise to ensure that the wire will clear the staggered sleepers on its way across. We have mounted the pulley set on a wooden template with 3 lengths of screwed rod pushed down into the concrete - a length of rope attached to the opposite pulley gives us the alignment - all rather close but clear 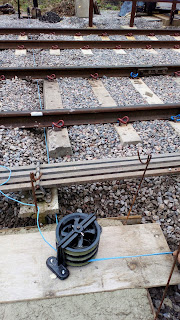 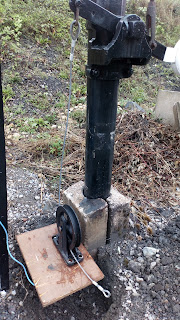 The pulley directing the wire up to the shunt signal is one which was set some time ago when the post was installed - some rapidly encroaching undergrowth appearing: 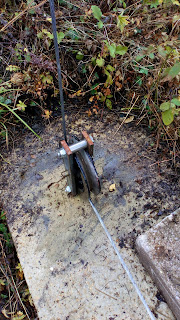 And just a reminder of where this shunt signal is positioned : 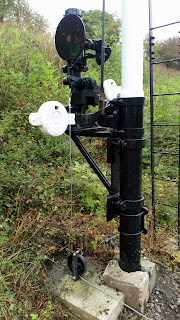 John P and Carl S continue with the drilling and fixing of the 4-wheeled pulley blocks along the wall of platform 1. The installation of these pulleys has been completed along platform 2
Today should see them all finished along platform 1. 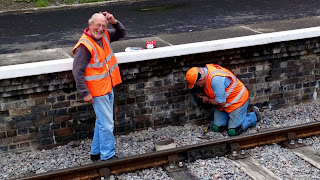 Next stage is making a start to position the stakes to hold the pulley blocks outside the platform limits. These will be knocked into the ballast and supported with a pool of concrete. Malcolm makes a start: 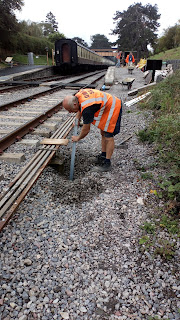 The two pulleys guiding the wires through the tube at the barrow crossing have been set : 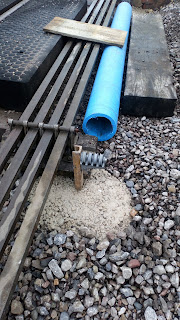 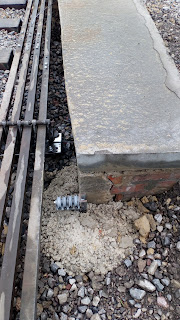 Back up north I fitted the two straps to ensure that the spacing between the sleepers that carry the fpl and its operating crank cannot change and affect its operation: 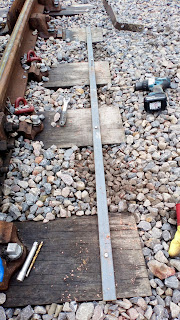 The  fpl and its operating "slotted" stretcher have been positioned here - some drilling required to mount the fpl on the steel plate. The stretcher also has to be insulated from the Cotswold side rail for track circuiting purposes - will expand on this when we have the parts sorted out 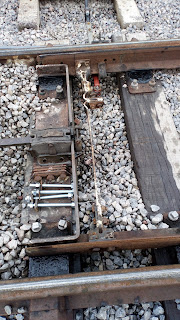