Whilst a lot of the workers are up at Broadway having fun with things mechanical. There were still four others around Winchcombe getting on with clearing away the old cabling- thats Carl and Keith. Paul and I had decided that an inspection, particularly of the lesser used Signal Post Phones would be a good plan before the intensive Santa Season. Particularly the two at Gotherington where the Concentrator System may well be the only effective communication in the event of a problem  either with the line or the train, even Vodaf... don't work everywhere on our line!

The result was that we had to change a phone at G20  whoever would put a poor old Sweeney phone (706L) in an unheated cabinet and then leave it there for ten years!, 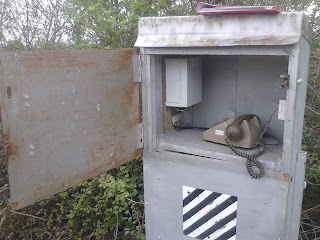 It did work when last tested in April Now I suspect the damp has got at the old carbon Transmitter Insert- there's little point in changing them as the carbon granules are all over 30 years old. So we change the whole phone with an electret type, when we pulled it out we found a mouse had tried to have dinner on the handset cord so it was a failure waiting to happen. Then it was over to Winchcombe to look at W3/5 Tunnel North and the W36, the Outer home which were all OK
Much later in the day, Paul got a lift in the rail-car "Malcolms Buggy" driven by Neil whilst they were pulling out old cable and so he was able to check out  the phone at Tunnel South (W2), all working but no incoming ring. Hopefully we can get back to that next week and Santa will complete all his trips without a problem 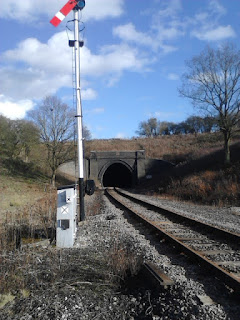 Since the last report, the 5th and final Concentrator, for Broadway, continues in new build in Kevern's workshop. I gather it is close to Final Test but presently we have a problem with the bench power supply, anyone got a spare 50v one laying around?

Watch out for Santa