We continued at Broadway today with the fitting of the  point rodding angle cranks on the steel plates exiting the signal box tunnel.
Having lined out and pilot drilled the base mounting holes for the four northbound sets of rodding last week we now set out to position the three angle cranks for the southbound rodding.
Having got the positions set we decided at this stage to unbolt the steel plates and drag them out onto the ends of the freshly placed sleepers - a four man job! This enabled the use of the magnetic drill  - hopeless trying to do this in the tunnel with a hand drill.

But first we needed to drill (by hand) two more holes into the C- channel using the pre-drilled holes in the plate as a guide. The C- channel has turned out to be pretty hard and resisted several drills (13mm) before getting through. John P struggled valiantly in the restricted space: 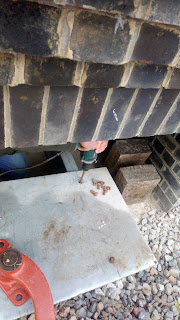 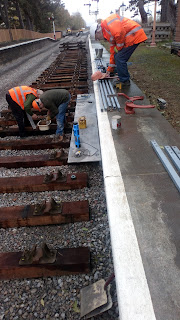 Having got the plate assembly out and clear for attack from above,  the magnetic drill proved its worth. Each crank base is to be secured by four 3/4”BSW bolts ( we try to keep it heritage!) so we drilled through the plate with a 25/32” drill. Bolt clearance to be kept to a minimum to prevent any possible movement during operation.  We are hoping at this stage that our lining out was accurate! 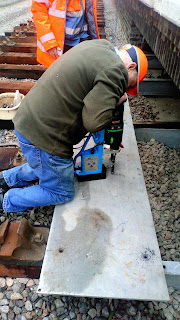 The finished pattern for the northbound cranks: 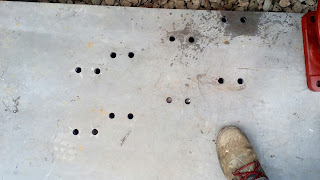 And finally, all 7 bolted up in position with the plates back in . Our lining out proved to be pretty accurate and we got all the bolts in without any drama: 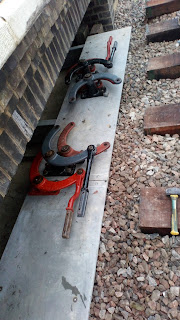 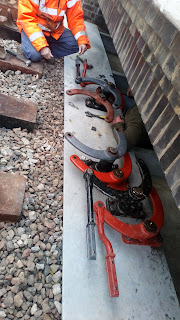 All this activity took us most of the day so nothing else to report, but we did have time to admire everything that was going on around us - new fencing going up between the goods shed and Evesham Road Bridge and  window frame painting on the station building. It’s a magnificent sight now looking northwards from the signal box vantage point.