Tidying up at Toddington

Six of us departed to Toddington to do some signal maintenance and to progress the fitting of the electric lock in the signal box (for the motor operated south pointwork).

Some of the signals at Toddington North need a bit of attention. The paintwork on platform 1 starter signal has got some unsightly damage and rust staining where the down rod has been "slapping" against the post when the signal arm bounces back against its spring loaded stop. 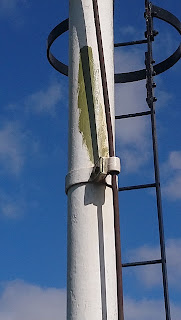 We decided the best solution was to fit an additional guide to re- align the down rod and prevent it whipping against the post. So the existing guide was re-positioned at the top and a new one fitted lower down (the black one in the picture.) 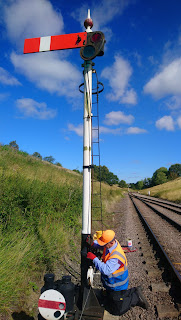 This left an unsightly ring of chipped paint which needed attention. We primed the damaged areas and returned after lunch to put on undercoat. We will return next week to finish the job with topcoat.

The North facing sides of all the posts here have a significant coating of black mould on them
I think we will bring a bucket of water and copious rags to give them a good clean and slap on another coat of white gloss while we are at it.

The next task up here was to adjust the spectacle plates on two of the ground signals where the horizontal red stripes have wandered slightly towards the vertical. It appeared that some slack bolts have allowed the castings to slip a little which has affected the correct alignment. This one is at the base of the bracket signal. 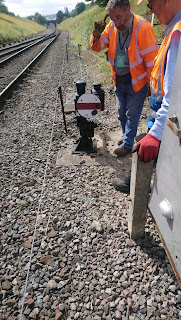 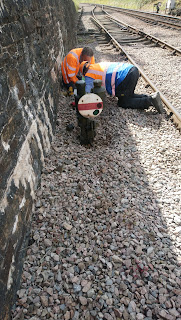 The red perspex lenses in both of these signals have deteriorated badly and are frosted over. We have some re- conditioned spectacle plates back at base which we will bring and replace next week.

Most of the afternoon was spent under Toddington box wrestling with the positioning of a bracket which attaches to the point operating lever to drive an electric lock. Access here is extremely limiting  - a bit more work required to get the positioning correct.
Couldn't get any meaningful pictures of the set up - here's the best I could do with Carl P contorting! 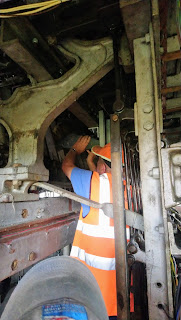 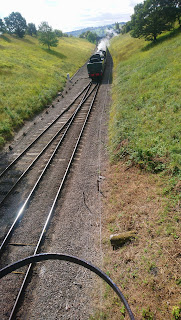 And heading off to Broadway with 2807 on the back. 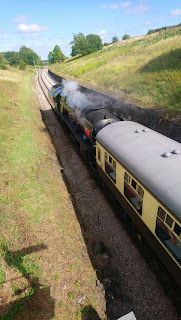 Hopefully this should be the last week of topping and tailing as the repaired point work is due to be re- installed this Friday at Broadway.