Eight volunteers at a wet Winchcombe yard today. It was OK until lunchtime and then down came the rain, curtailing most of the outdoor painting objectives.
No jaunt to Broadway today - still a bit more track bonding to finish at the northern end. Best to have Neil C with us for that (he is on hols).
So, what were we up to?

The bracket signal which is  to be installed at Broadway to control entry from Toddington into platforms 1 & 2 is currently languishing horizontally in the yard at Winchcombe and is in need of some tlc. The support strut is being removed so that we can give the main post a good rub down and some decent coats of paint 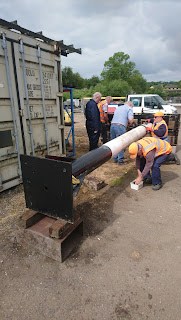 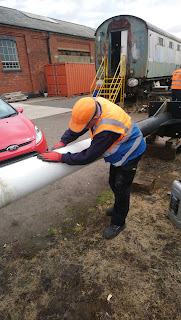 Followed by primer (where needed and then white undercoat 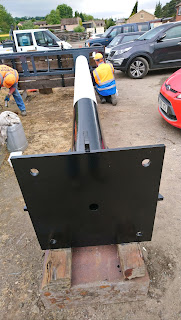 The base is in pretty good condition but gets another coat of black gloss anyway. The top structure consisting of a mass of riveted angle iron has been showing some rust so some chipping, priming and undercoat has been applied: 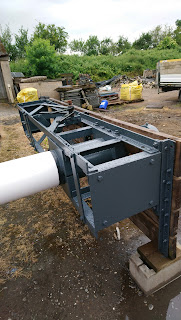 The two dols have been removed and are receiving attention by George B  by the side of our mess coach. Managed to get primer and undercoat on  with sufficient time for reasonable dryness  before the rain started. So hopefully no pock marked surfaces when we arrive next week!  Unfortunately these parts are too large to move undercover. 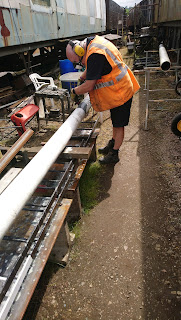 Keith L sorts out the paintwork on the support strut: 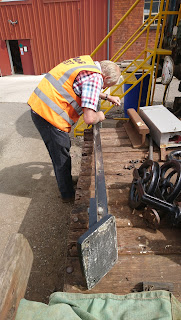 Two electric point motors are needed for Toddington South. So we have to select the best available from several units we have stored at Winchcombe. The best looking two have some broken parts or parts missing and others are beyond being repaired, so John P and Carl C spent most of the day selecting the best bits. 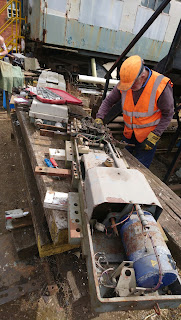 These Alstom units are pretty complicated with a mass of electrical wiring and it is virtually impossible to remove individual components without cutting wires. Luckily we have a wiring diagram which only the experienced electrician is likely to understand (this is where Neil C is invaluable!)
Some of the wiring will need replacing anyway.

P S Absence of blog last week was because I was down in Hampshire and managed to fit in  a quick visit to the Mid Hants and capture a shot of this 9F pulling into Alresford Station.
Those of you who may have read the latest edition of Steam Railway will have had a feast of information about  these magnificent machines! Quite a lot of them. 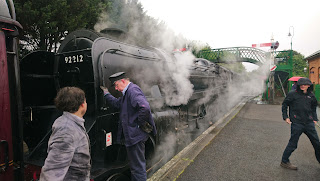