A smaller contingent of us at Broadway today - six of us.
Neil C, Carl S and Peter W continued with track bonding. 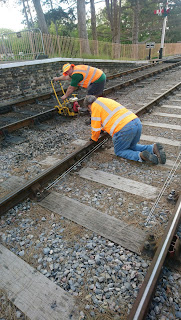 Which was now progressing up through the platforms - in between interruptions from passing trains - Dinmore Manor looking resplendent today in the sunshine: 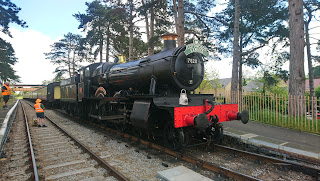 The bonding was completed to mid platform so a bit more to do yet including the fiddly bits round the northern point work.

George B was continuing with the makeover of the signal box steps
which have now received a coat of primer : 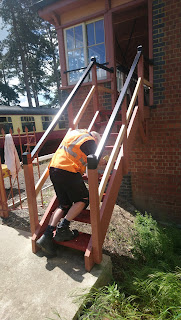 And the tread plates have been given a wire brushing ready for painting: 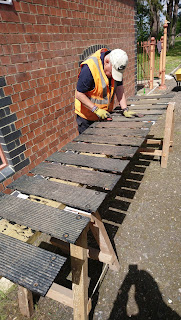 A small problem has arisen to make bonding with the standard bonding wires at the northern barrow crossing not possible. The  ends of the fishplates are very close to the rubber pads which won't allow access to drill the holes, so the holes have to be drilled between the next gap back. The solution is to cut some  longer lengths of fencing wire of a similar gauge (8 lengths needed) and thread them under the rubber pads trying to oid the hidden clips and chairs. This was achieved after much fiddling and swearing!
Lifting of the pads was not an option - far too heavy without mechanical assistance.
Now ready for the "bonders" next week. 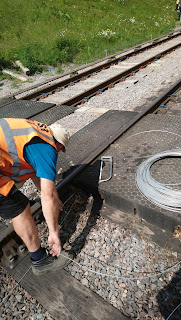 We have noticed that the older stock of point rodding used towards the end of platform 2 is looking a bit shabby and rusty and lets down the view from platform 1 of our previously restored and painted rodding. So I have embarked on a painting  odyssey with the zinc paint and a wire brush. I am not including any more boring photos of rodding though!