The next major stage at Broadway for the S & T Dept is the installation of the many cables needed for the track circuits, signal lamps, signal detectors and phones. So a strenuous day was spent shovelling ballast and replacing cable trough lids.
Cable drums ready for action once Neil C had determined the individual lengths required with a measuring wheel: 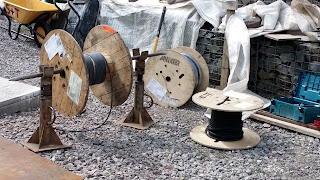 We started at the North end of platform 1 adjacent to the line-side cabinet by signal 39 (the one with the ground signal mounted on it). Firstly to dig a trench to feed the 20 pair cable (the one coming from the signal box along platform 2)  into the cabinet: 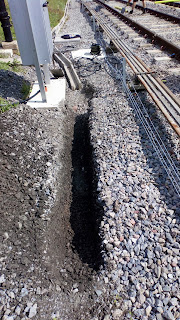 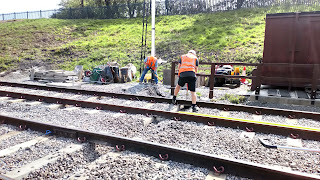 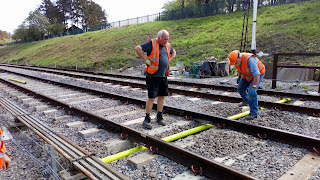 Signal lamp and signal detector wires from signal 38 and track circuit wires all have to cross over here. The object of the yellow tubing is to highlight the position of wiring hopefully to prevent damage by tamping, lighting of bonfires on top of cables (this has led to cable damage in the past!), etc. This is the reason we are now generally burying the armoured cables to a greater depth and using concrete troughs where burying is not practical.
There is now a multitude of cables feeding into this cabinet including a second 20 pair which feeds up to the next cabinet opposite the Route Indicator signal - quite a tangle to feed in! and 20 pair armoured cable is quite a swine to bend in a tight radius 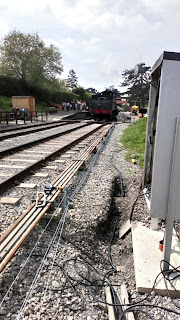 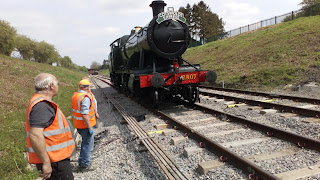 And then we moved northwards to the smaller cabinet opposite the Route Indicator signal to repeat the laying of the plastic tubes to take the wires from the signals and track circuits.
A close-up of the radial hole drilled into the tube to feed in the track circuit cable: 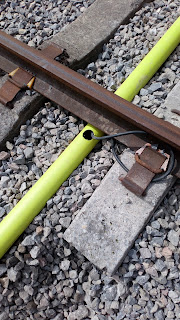 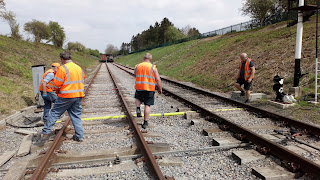 And of course the track circuit cables. Just managed to get these all fed into the cabinet through our "patented" 90 degree brown soil pipe system! 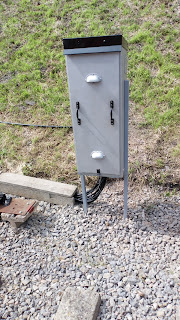 And finally the lids were replaced on the cable troughs between the two cabinets: 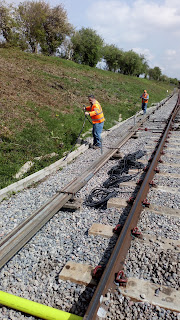 Although all the necessary cables are now installed and buried with the exception of the ones along platform 2 (mini digger channelling required here) the connection of these will be a significant job for the future once we have the cables fed into the signal box (hole drilling through the brickwork required).
Over time the signal box locking room has become a workshop/storeroom and has accumulated a lot of equipment which now needs removing and tidying to give easy access for wiring activity.
The big tidy next week perhaps unless track bonding through the station is given priority.

PS. The cabinet by the bracket signal at the south end of the station holds the record for cable numbers - 15 in total - I'll treat you to an internal view once all the connections have been made.
There will be a fair amount of testing required.

I believe that the two track circuit connections from Toddington to Laverton have already been connected and tested and operate in Toddington Box - first one from the viaduct to the Stanton Aqueduct, the second one from the aqueduct to Laverton. The next two circuits will terminate at Childswickham Bridge.