Couldn't make Tuesday this week but have taken some pictures of the steady advance made.
Steve (of JCB fame) has made a sterling job of tidying up the alignment of the top of the catchpit at the North end of platform 1: 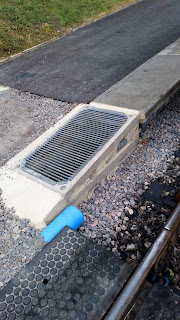 And a thick walled pipe has been laid at the barrow crossing through which the north bound signal wires will eventually pass. This will be repeated at the other side of the crossing: 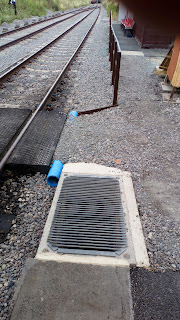 Significant progress has been made with stool installation and the concrete stools have now been set and aligned up to the first set of points. You will notice that they are progressively moving away from the track so that the rodding is in the correct position to connect with the cranks: 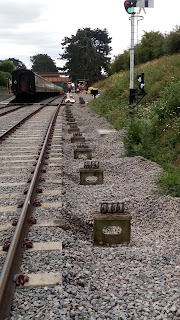 The blocks for mounting the cranks have been carried up - these will be set with steel plates bolted on top next week: 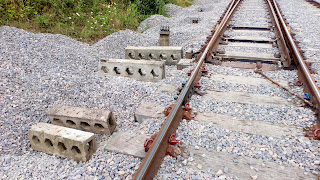 While Steve had the mini digger here he had excavated the rest of the holes up to the second set of points. This is particularly helpful because the 3-wheeled and 2-wheeled stools need significantly deeper holes and saves us a lot of ballast shovelling! 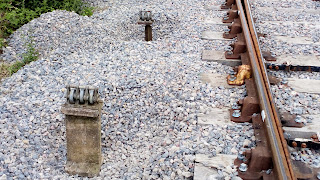 Forward to today.
As I mentioned previously we have had to modify the end of platform 2 ramp to allow the rodding to pass through. The slabs have been angled off and some of the brickwork removed: 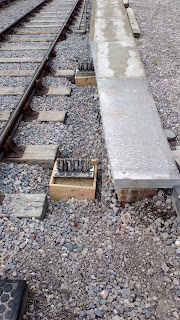 The LH sleeper will be removed to allow the rodding to pass through, the blue tubing for the signal wires where the RH sleeper is - will then covered with (probably ) a steel plate to re-instate the crossing. 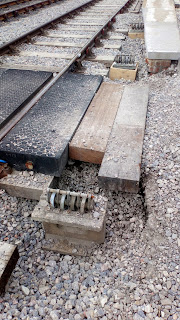 Then to tidy up the ramp. The two angled slabs have been pushed back to leave enough room to form a concrete wall against some shuttering: 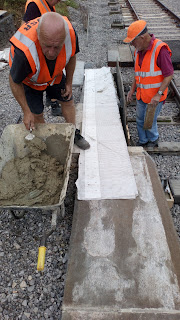 Should look nice and tidy when we get the slabs back in position.

Another rodding task is required back at the signal box.
The rods which pass through the tunnel are unsupported over a significant length. To overcome this Malcolm has produced a frame with rollers. This will be bolted to the concrete floor of the tunnel at mid span. A job for a day when we have a bit more muscle and time  available! 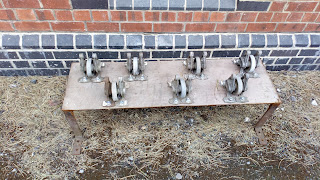 All change from rodding to signals. We have taken delivery of a batch of  short signal  wires with pre-formed "eyes" for fitting round pulley wheels. These can be a tight fit through the frames , so we have had a trial fit - some are a bit tight and need some gentle persuasion - but better this than having to dismantle: 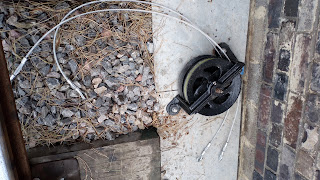 Here's George with a batch of them: 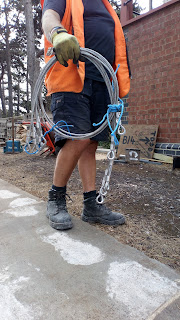 And 8 of them in situ ready for onward connection. These are the pulleys opposite the signal box at the base of platform 1: 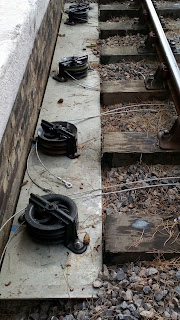 I feel signal wire report no. 1 coming on!
However, the rodding story will be continued for the time being.