Four of us off to Broadway today to continue with the setting of the rodding stools.
But before we left Winchcombe we loaded up with a few more lengths of rodding from the old stockpile (having now used up all of the reconditioned lengths). Most of this looks in reasonably good condition. A rough count up shows that we will have more than enough to complete the job at Broadway : 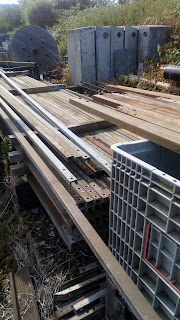 We have also taken a load of aggregate on the pickup and barrowed this into a pile at the top end of platform 2 so that we can mix concrete closer to the "action point" - still had to wheel the electric mixer all the way up from the signal box though. John P carefully wheels it along the edge of the platform : 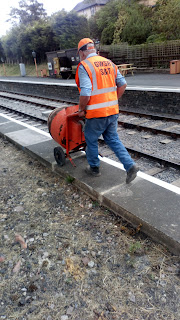 and starts to mix just as 4270 does its first smokey run round: 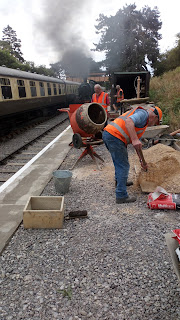 During the day Carl S and John P concreted in the final 15 stools up to halfway along the platform ramp: 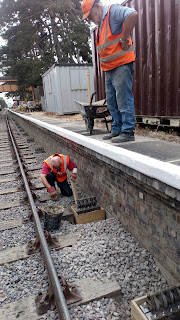 This is as far as we can go before the corbelling gets in the way: 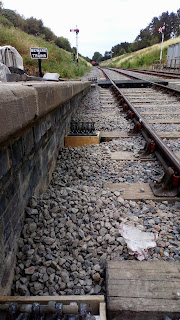 This next picture shows the amount of ramp that will have to be sliced off to get the next two stools and four signal wires through: 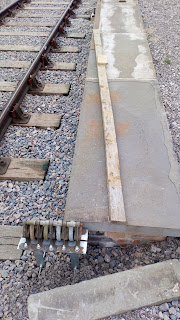 So, for a change, once the next 3 fabricated stools are in place  we proceed with concrete stools directly into the ballast, without further concrete, up to the first set of points. This view gives a better idea of where we are up to, just short of the barrow crossing: 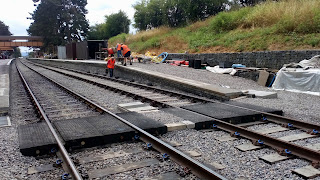 We had just enough aggregate left to complete another task just north of the route indicator signal.
A concrete pad is required for a ground signal in the 6ft between the headshunt and siding. This will control shunting operation out of the siding.
So, with some shuttering that had been prepared earlier we wheeled 4 barrow loads of concrete up to complete the job. Carl S on tamping duty! 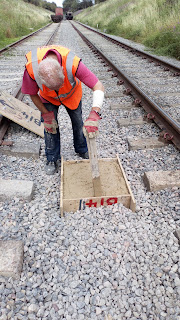 And once levelled off, a wooden template holding the 4 mounting studs is "wriggled" into the concrete. Here's Malcolm W surveying the finished job- direction Toddington and signal number 14: 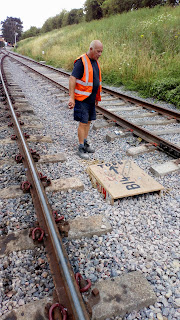 Just to finish off today's blog a little further clarification regarding the modifications to Toddington box to accommodate going north to Broadway.
This, as far as I can recall, was all carried out when the railway wasn't running during the winter of 2008/2009. The lever frame was extended by 2 levers as part of this. I can remember painting/repainting  all the levers in the box during a very cold spell when I had the stove going to keep warm while the rest of the team were outside shivering! I am still reminded of this when getting the "plum" jobs!

So, hopefully Toddington Box is prepared for Broadway action.