Eight of us on site at Winchcombe today. One team carrying on with sorting out the faulty cable across the tracks from the signal box and the other preparing some more parts for the signalling at Broadway.
A lot more ballast digging to prepare a trench for the replacement cable (a 20 pair armoured). 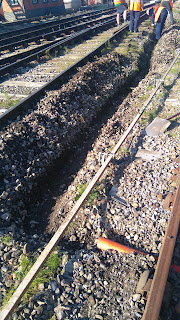 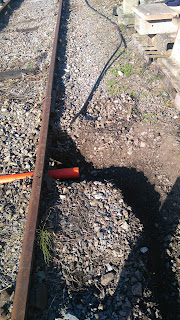 The cable will pass under the siding track through the orange plastic tube. This piece of cable will be approx 25 metres long to join the existing lineside box and the new (smaller) one pictured last week.
It has now been buried in position and will be connected up as soon as poss on a non-running day so that we don’t cause any disruption to operations.
We are now interested in finding out exactly what and where the fault is with the old cable. So, another ingress has been cut into it (at the position of the piece of covering grey tubing pictured below): 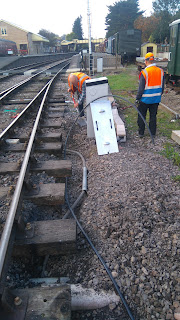 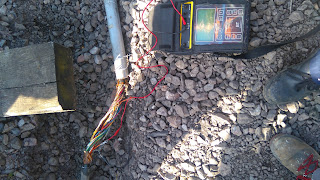 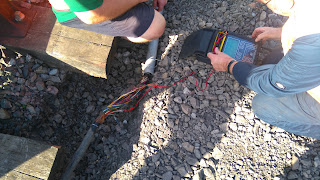 This indicated that there is a fault approx 2 metres away in the Toddington direction. At this position the cable passes underneath water and electricity supply cables so we can’t pursue any further investigation until we have cut and dragged it out. You can just see the tubes carrying these services coming out between the sleepers: 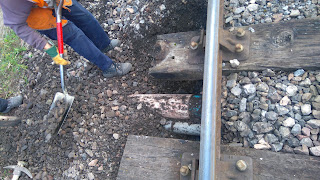 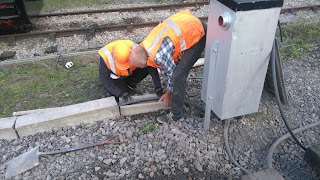 And a view of the spaghetti of existing  connections inside the cabinet. 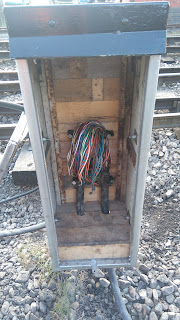 Part two consisted of organising some more fittings for Broadway.  Once we have fitted the steel plates for mounting the angle cranks for the point rodding and the pulley wheels for the signal wires we can start to line out their positions. To assist with this we have prepared two of the fabricated steel  rodding stools and bolted on a four wheel set of rollers: 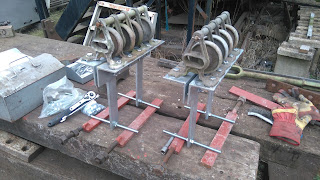 The screwed rod bolted at right angles to the feet will serve to anchor them in a concrete “boot”. The height at which they will be set is determined by finished sleeper surface. The face onto which the roller sets are bolted will be level with the sleeper and spaced in the gap between the sleeper end and the platform wall. A length of point rodding laid on these two sets of rollers will then give us a good datum for positioning of the fittings.

Here are a few of the bits in the process of being cleaned up: 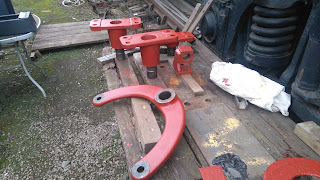 and some of the speed restriction signs destined for Broadway 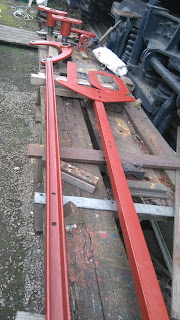 and some of the lineside cabinets now undercoated - silver and black top coats to follow: 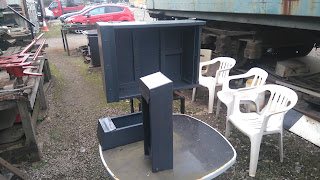