At last we have managed to move some components that were always physically in the wrong place to somewhere where they made more sense.

We have a 2 50 line paxes,  at two signal boxes, these are linked (Tied )by two tie lines in each direction. The book says that  the  line resistance  must be more than 500 ohms so there are these padding resistors; but they were mounted on the side of the Main Distribution Frame and the plan is to update that with a more modern Krone Block. This will give us more reliable access to lines and make mistakes  in tag counting less likely.   But that is still some way off- a job for the winter shutdown.

These resistors were augmented by surge arrestors . These had not operated in the last 20 years since all our cables are buried so I think that they were just Belt and Braces- just in case.  The problem was to understand the Strowger mindset and correctly interpret the diagram.
The notes call for many changes in a tie line circuit that make it very different from a normal " subs'" line so firstly we copied that part of the drawing, then tippexed in all the changes and overlaid it on the original thereby making, in effect, a Tie Line Diagram.

This took a bit of time but was most helpful. The trick then was to find the correct tags on the rear tagstrip and no, the line circuits are not the same numbers as the numbers that you dial, so it needed both Kevern and I to operate the pax by sending a call to the other pax and then seeing which line circuit operated as the call came back again. Eventually, after advising all the Users that the ties may be interrupted for a short period,  we had all the answers. Sixteen jumpers and  an hour with the soldering iron later, and Voila' the mod was done. Like all electrical type work its not very visual . If you do it properly there's no sparks or bangs! but here's a pic of the rear tag block. 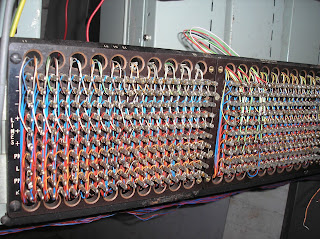 And after testing we left everything working as normal.
When I started this , being used to Post Office drawings I didnt realise the significance  between
tag - and tag -'. Now I do!
The job of upgrading that original "MDF " into a modern system moves a lot closer.

Thanks for reading and thanks to Kevern for all his help