The bracket signal which has been residing in Winchcombe yard has now had its baseplate welded on
and coated with primer. Two more coats of paint and it will be ready to replace the shabby one at Cheltenham Race Ccourse - probably during the closed season. 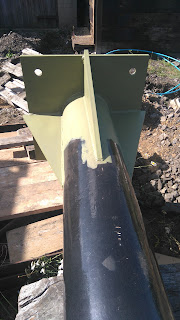 Some adjustment was required to the lower locking tray at position two. The lower tappet blades were slightly out of alignment with the slots and were a bit tight. The only solution was to re-position the tray and drill some new mounting bolt holes. Here's Malcolm at it: 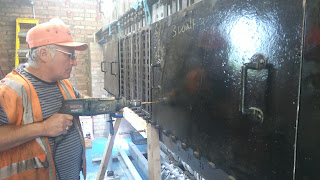 The lower tappet blades will be connected to the electric locks which will eventually be mounted on the steel beam underneath the trays. There will be 16 of these. We've marked the positions of these with the corresponding lever numbers - here's a sample shot: 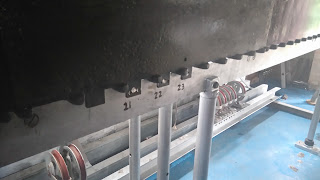 In the meantime Peter B and Richard C carried on with the re-stacking of the concrete cable troughs on pallets up  the north end of the site. There's probably another day's work required to finish this and   then they will be moved off the track bed.