Reported for duty nice and early, full plan.
Today I will clear up some of the problems with the pax at Todd, or so I thought.

Now that we have these units on trolleys it is possible to get to the innards properly.
The secrets are all on  a large tagstrip in the rear which has been pushed back to the wall for a lot of years- Don't tell Mr Almon B. Strowger because he will probably cancel the warranty! ( He invented the system in 1891, ours was built around 1959 so its a new one really).

First lets just check the faults are still there, then lets just change the jumpering  to use circuits that do work and then we can sort out the faulty ones in our own time. 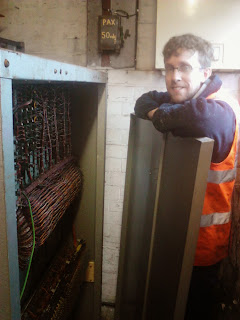 Interesting,  The drawing number doesn't match the number on the tagblock and the tag strapping doesn't make sense. Hmm
And there I sat. Looking at it for another couple of hours.
I have learnt that its better to look and suss out before you make any changes.
Neil, I hope you are reading this. Get well soon!

Later, I spoke to Others Who Know, thanks Ian, and was talked through the logic of it. So now I think I know. Try again. All I need now is a pass out from 'er indoors and we will stand a good chance of sorting it.

Another dept of S&T is the Oiling gang, led by Bill Tyndall. It looks like they might be about to start Blogging their exploits, and get more recruits. "Oiling to Broadway" does it roll off the tongue?

He doesn't know yet but the reporter may well be Mr Roy Steel.
Don't forget Roy, you heard it here first!

Sorry about the boringness of todays Blog, here is a picture of the cat we co-share with next door 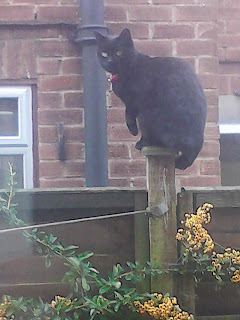