Have had a couple of weeks off for medical reasons which also needed some quaranteeing beforehand - but I am now released for action!

We had an urgent assignment at Toddington this morning to re-bond rails. Neil C and myself set off on this mission from Winchcombe with all the necessary kit.

PWay had removed the crossovers north of Toddington Station to replace them with new ones. This meant that some of the track bonding wires had to be cut to enable this. Unfortunately because of track alignment problems the new crossovers could not be installed so the old ones have been temporarily replaced. So re-bonding was needed to ensure that the track circuits functioned to allow the running of trains. 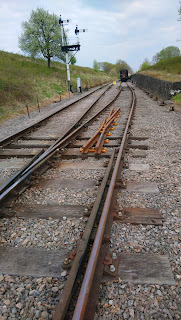 We used the positions from which the wires had been cut by chiselling off the residual wire and pins flush with the rail and then  drilling and punching out the remainder. 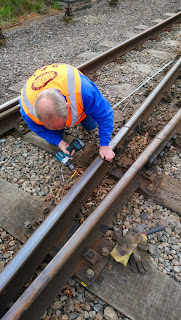 On the walk back to the station we inspected two of the lineside cabinets. Both of these are in the frame for re-wiring. The one nearest the road bridge is really showing its age and is very unstable with a rotten base. This is probably in need of fairly urgent replacement - a strong wind could see it keeling over! 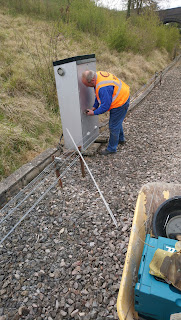 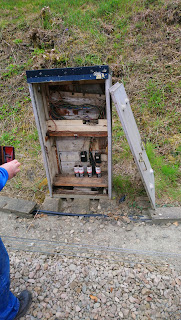 Luckily we have one of the same size back at base which, although in need of cleaning up and painting, will do nicely. So guess what the next job is! 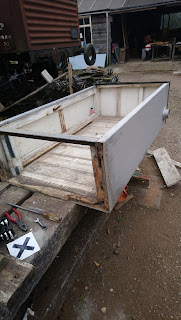 Having cut up some plywood panels, a box has now been constructed to provide a storage facility for coal and kindling in Winchcombe box (similar to the one previously made for Broadway) 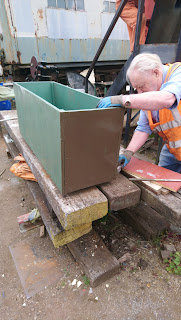 John P seen here with the brown paint over the green primer.
Curly

Peter W in today to continue with the restoration of the cabinet for Toddington. 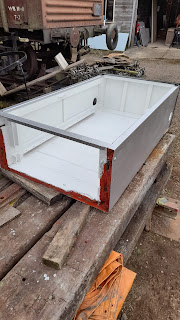 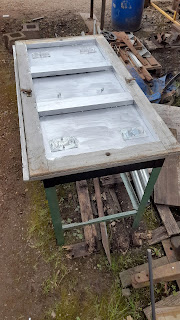