We continued today with more signal? refurbishment. Signal 33 (just north of the entry to Greet tunnel) was having a problem with its spectacles!  The green  lens (plastic) has turned white - 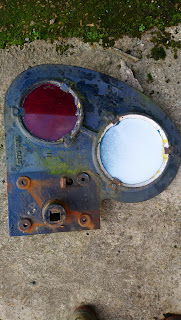 So the signal arm has been removed from its spectacle plate - a few stubborn bolts had to be cut off with an angle grinder - and then cleaned and bolted back onto a freshly  refurbished plate. 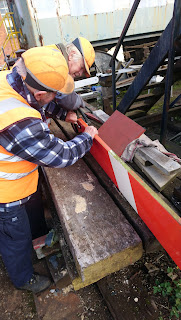 Then back up to the signal in the railcar to refit the plate and arm. Here's the signal post without its arm (looking towards  Greet tunnel portal) 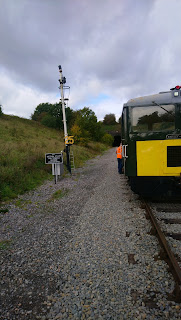 Neil C who  was up the ladder wrestled the spectacle plate assembly back onto its pivot and re-connected the down rod. It needed the strongest of us to do this! 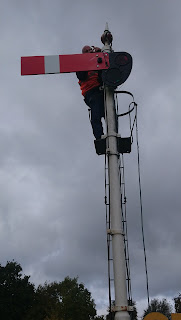 Today's team of Neil C, Carl S and Keith L having ticked off another job. 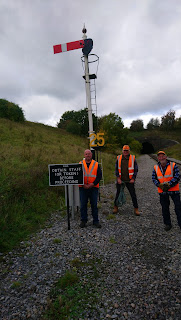 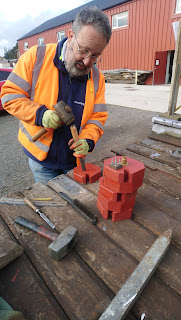 And a few more preparations for the replacement Cheltenham bracket, including the drilling of a plywood template which will be used to set the mounting studs in a new concrete base. Here Carl S is drilling the holes in the template to match the baseplate 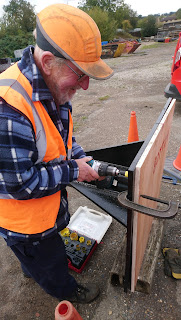 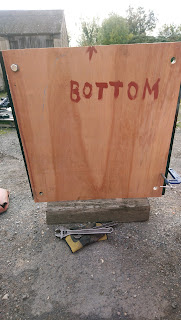 Finial fitting is always a bit awkward. Even with the through bolt tightened they will not sit vertically. So our solution is to cut and fit thin rubber discs inside the base of the finial - these two needed three to ensure that they sit squarely on top of the post. 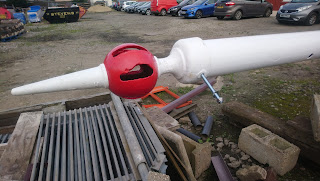 The down rods which attach to the balance weight arms for both the main signals and the call-on arms still have to be made. Each one has to be made in two halves and them welded together once the correct length has been set. Bottom end shown here has screwed end into a fork and pin for fine adjustment  whereas the top end has an eye which fits on a peg in the spectacle plate. 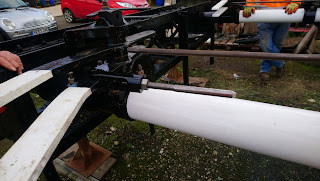 (should have taken a few more pics, but I hope you get the drift!)
Note the coned end prep for welding. 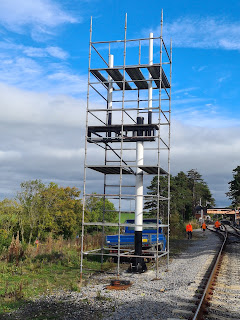 Stop Press - Action at Broadway , Thursday
Neil C, Malcolm W, Andy D and George B erected scaffolding round the new bracket signal. This now opens up the prospect of some more open air activity with signal fittings. Hope we can find them all!
Curly
Posted by Curly at 08:34