A total of nine of us  in attendance at Winchcombe today with a lot of cleaning and painting in prospect.
First mission was to rescue a large lineside cabinet from the back of the yard: 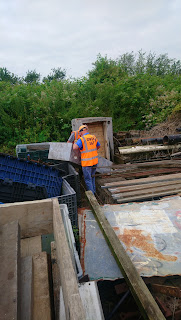 This is to be cleaned up and converted into an oil store for our Oiling Gang's equipment at Toddington.  (We have already prepared one for Broadway which will be sited behind the signal box).
A bit of carpentry required for a shelf and a new base: 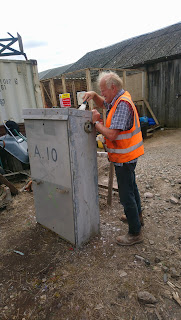 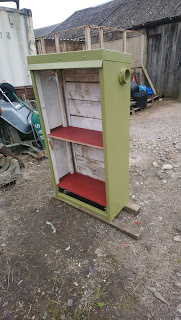 We have a selection of ladders, two of which are needed for the crow's nests on the bracket signal for Broadway. Jim P and Malcolm W sort this out to make sure the two lengths are satisfactory 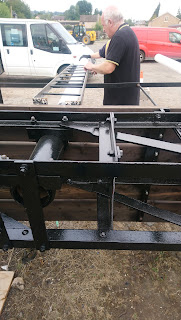 And then it's back to the paintbrush for Jim to bring them back to exhibition standard! 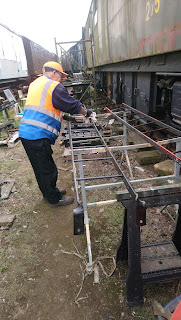 All the newly installed signals at Broadway will  require lamps. These will consist of LED lights in traditional lamp casings. We have a selection of old casings which will need a fair amount of attention to make them presentable - we could do with a grit blaster for this (a lot of fiddly areas difficult to get at to clean off rust) - but Peter W has a go with emery paper and needle file: 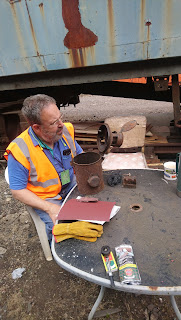 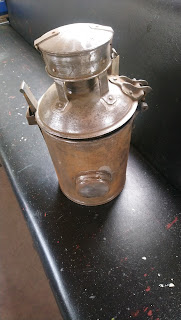 Luckily we should have enough of these lamp casings because as we were discussing the different types Malcolm produced a brand new one of which several had been made for us some time ago.
One of the problems with the old casings is that they have a series of slots in their base to allow air to circulate through to the oil lamp - they tend to rust away badly in this area making them difficult to re-mount 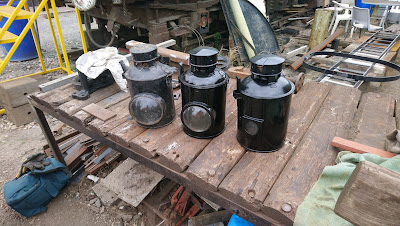 Paul D and Mike S, two of our telephony and electrical experts were on site today continuing with the PAT testing of various equipment including the station vacuum cleaner! 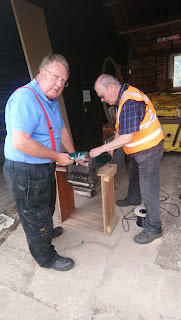