Five of us off from Winchcombe to Broadway today with the main objective of setting a vertical pulley wheel on a new concrete block at the base of signal 39 (end of platform 2 north) - hope I'm not going to get my norths and souths mixed up this week!
This pulley will re-direct the signal wire from the balance weight arm of the ground  (shunt) signal through 90 Deg towards the track. First a bit of pick-axing and digging to remove some stubborn ash sapling roots (of which there are many on this embankment) - must say the task has been made much easier following a major embankment clearing job by the Broadway group last week. 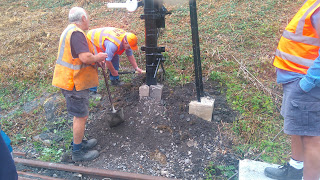 and then with a bit of on the spot shuttering in place the "pouring" of the concrete followed. It took 5 large barrow loads to fill it. Jim P is on the shovel here 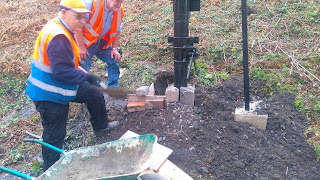 The pulley is mounted on a fabricated bracket which is pressed into the concrete, it sits on a small wooden frame to prevent it sinking any further than the desired height. 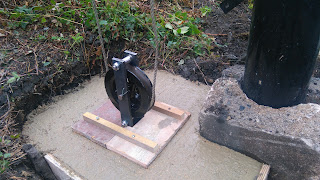 The alignment and clearances were then checked using a length of rope. 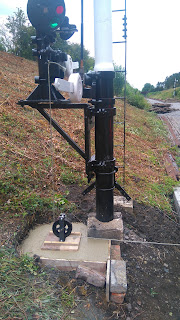 Them back to the signal box for a few more tasks. The cabinet I mentioned in last week's blog has now got some substantial shelves fitted. Jim P, Richard C and Peter B exercised their carpentry skills in sawing, drilling and screwing. We now have an enviable storage facility! 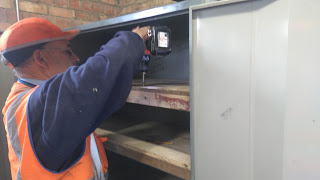 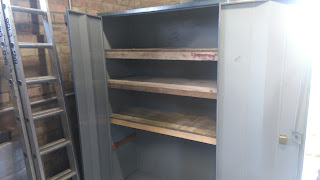 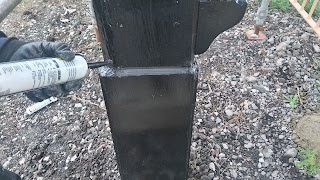 An update on the locking system under the box. John P and Malcolm have fittted the missing locking tray so we now have a full set. 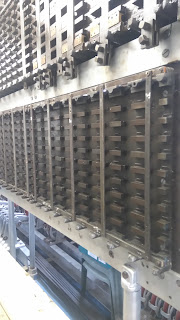 Malcolm is now pushing on with the lengthy process of fitting locking bars, cutting slots, drilling and tapping to attach the brass locks, etc, etc. I will attempt to explain an example of what is going on here.  A-channel locking (the row at the very top of the trays) means that when lever no.2 is pulled (route indicator signal) this locks all levers of opposing signals coming in from Toddington, and locks the FPL and point levers - we tried this out and it works - quite a jigsaw - glad Malcolm is on the case!
Here is a close-up  of the Lock for lever 2 on A-channel 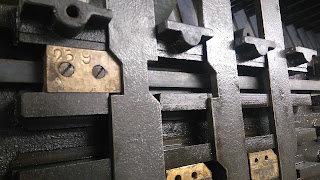 You will note that there are some redundant slots on these tappet blades from a previous "life" - some new slots will require cutting in  different positions.

While I'm in the explaining mood here is the extent of the signalling installation that we will be putting in at Broadway for the current layout. You should all be familiar  with the north end by now, but the  additional signalling up there will be a double  ground signal  at the route indicator  and one in the 6ft.  north of the points.

Going south, the platform 2 starter will be the LH arm of the existing bracket signal (the RH arm will be taken off).

Then there will be a new bracket signal approx 100yards south of Evesham Road Bridge with 2arms and 2call-on arms for the approach from Toddington.

Then an Advanced Starter Signal just north of Childswickham bridge.


An Outer Home Signal 720 yards south of the box

So in summary, we  have one bracket, 3 posts and 3 ground signals still to instal. Plenty to be going at.