A total of 7 of us at work today. Paul and Mike went off to do telephone and fault finding work which is part of Mikes separate blog.
Just a footnote to add to his blog. I understand that the main reason for the Poor condition of the piece of 30 pair cable he is holding was the repair of this following a lineside bonfire which melted  some of the insulation circa 25 years ago!!

First task of the day was to re-fit the steel "boot" to the wooden post. This has now had all four seams welded. Three of us managed to manhandle it most of the way up the tapered post 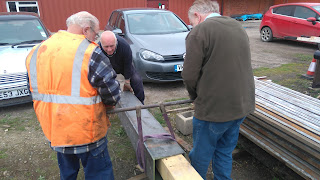 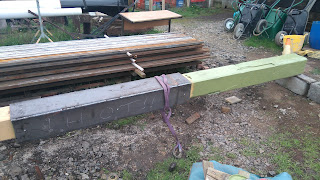 However, with just a few more inches to go it got tight so we resorted to a bit of heavy persuasion with Malcolm on the sledge hammer: 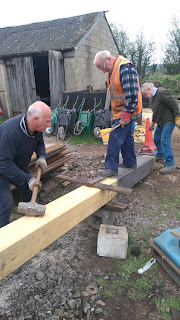 It wouldn't seat down quite as far as the position it was in when tack welded- it has probably distorted slightly after finishing the seam welds in its free state. A couple of inches of timber protuding at the bottom isn't a problem and is going to allow copious layers of protective paint to be applied. The boot was then secured in place with the original 12 screws that had held the plates prior to welding  (absolute belt and braces)
We then applied a coat of primer paint to boot and timber. While doing this I spotted a date mark on the post (1929): 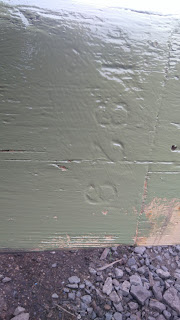 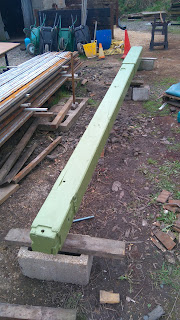 While this was going on John P and Malcolm started to dismantle the arm, spec. plate, ladder and lower angle crank assembly from the direction indicator signal - this will now be lifted out as an assembly (bit of trenching round the base required first) prior to transporting to Broadway 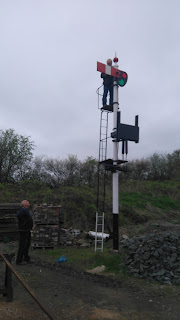 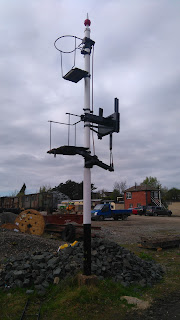 The wooden signal post will be held in position inside a concrete block with a layer  of  pea gravel . We have prepared the inner shuttering for this from some plywood kindly supplied by our colleagues next door at Carriage and Wagon. 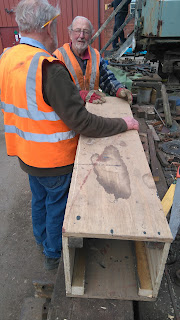 All of the large pile of point rodding has had its first stage of cleaning completed and a couple of the badly corroded ones have been cut up and painted for conversion into supports for SW signs along the extension. 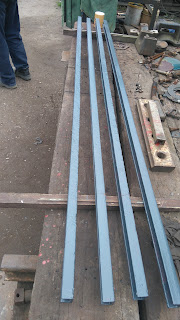 Oh, and just after tidying up at the end of play I spotted the decayed end of the wooden post that we cut off prior to restoration - it was in rather a state 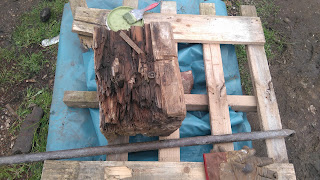