Another good turnout with 8 of us at Broadway today

Plenty to do to get the ground frame and associated fittings dug in.
Luckily we had Steve on hand with his JCB to do the heavy lifting and digging.
First stage was to get the frame up in the air to bolt on four concrete legs: 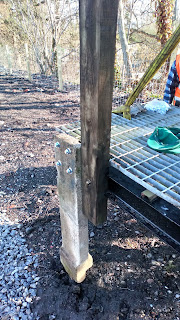 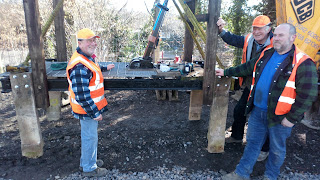 And then set it aside while four holes were ripped out of the old ballast. I'm glad we didn't have to do this by hand - there was a large amount of bricks, clinker and roots etc buried there. 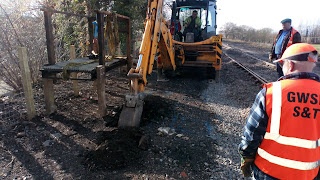 Then it was lowered in and levelled up 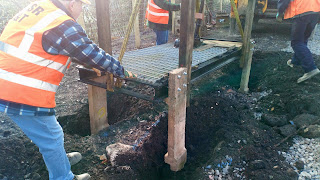 And the ballast shovelled back in to secure it in position: 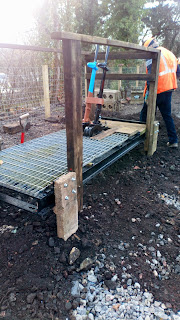 But this is not the end of the story.  We now need 3 more holes in which to sink concrete blocks to support cranks and rollers. Look at all the bricks appearing: 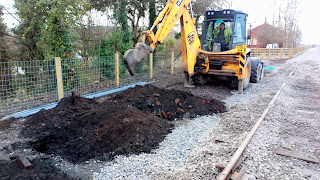 Having got the holes in roughly the correct position, two concrete blocks are dropped in and separated apart to match bolt holes with a metal plate which in turn will support a crank: 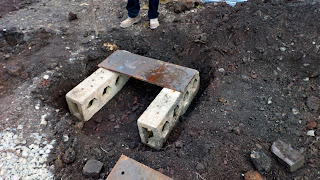 And the first crank goes on - this one will connect across to the track to operate the points: 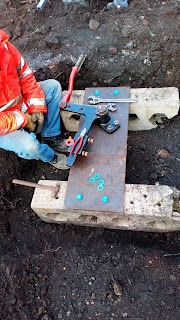 And this crank will connect across to operate the facing point lock: 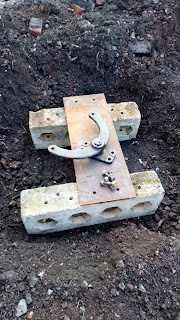 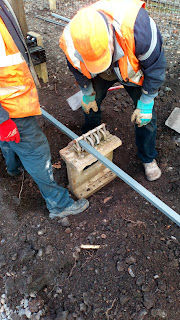 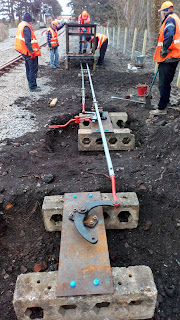 A bit more tweaking to the alignment and levelling and then we're done. A view from the operating position - light blue lever releases facing point lock after itself is unlocked by the staff carried by the train crew - then the black lever can be pulled to operate the points: 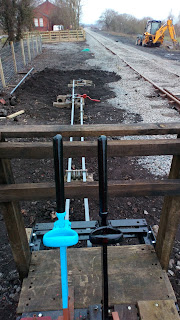 While all this was going on, three of the team disappeared up Broadway north to install the double disc ground signal on the concrete base at the Route Indicator signal. It will have its discs and balance weights fitted nearer the time of commissioning 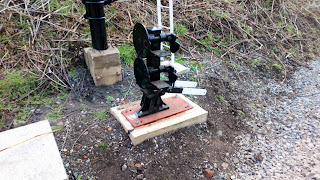 On the way back to a final cup of tea in the signal box we saw Steve having downsized to the mini-digger removing some of the recently dropped excess ballast from between the tracks. 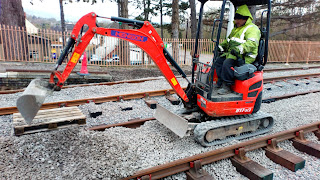 Finally, it was decided that because of the low temperature today, it was a good time to try  out the fireplace in the signal box - we had come armed with some kindling and a bag of coal. Unfortunately the only thing that  got tested was the smoke alarm.
There appears to be a blockage somewhere and only a limited amount of smoke made it out of the chimney (we did open the flap!) 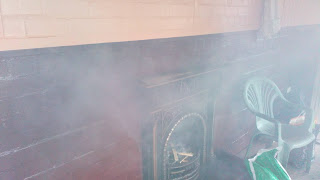