A good turnout today with 8 of us in action at Broadway leaving Mike  and Paul back at Winchcombe doing essential telephone stuff.

Neil C had already loaded  the ground frame, that we had assembled a couple of weeks ago, on to the pickup ready for transit to Broadway - just got to finish drinking tea and exchanging views on Channel 4's "The Biggest Little Railway in the World" before we set off! 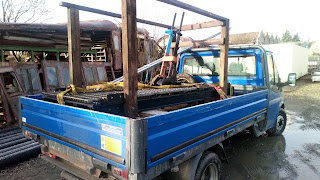 On arrival, Team A set off north to fit the two remaining stretcher bars to the siding points: 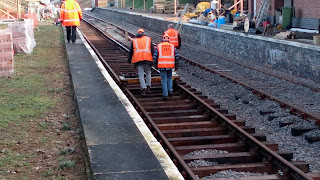 Team B continued with the lining out and positioning of the signal wire pulleys using nylon rope to simulate the wires: 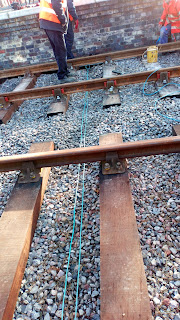 John P then got busy with the mag drill : 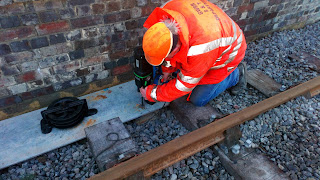 On the other side of the tracks it is now getting quite crowded and needs a bit of fine adjustment to get the best positions of the pulleys so that wires clear cranks: 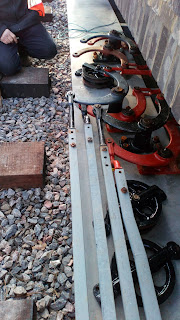 We nearly left Malcolm behind until we heard his plaintive cries from the tunnel! 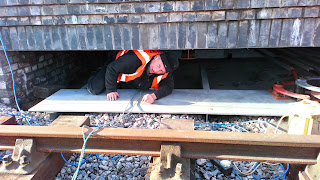 Meanwhile Team C prepared for Steve to lift the ground frame off the pickup. Unfortunately his JCB was stabled at Stanton so we decided to have an early lunch while he went to fetch it. Eventually it was hooked up and lifted  off: 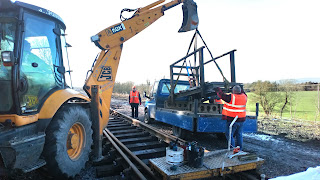 and parked it by the fence. 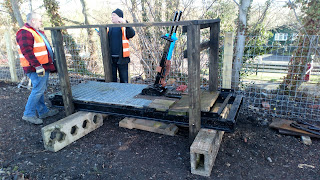 We also arrived with a selection of couplings on the operating table: 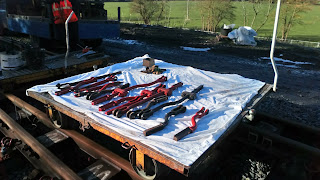 Unfortunately further work to instal the frame will have to wait until our next visit because we are  short of a few fixings  which we need to sort out.

Sub team D then disappeared out of sight towards Toddington with a measuring wheel to mark the positions for the signals that still need installing viz: the Advanced Starter , the Outer Home and the motor operated Distant - a good walk there and back!

On my way out I put my nose into the station building to watch the  tilers at work - some hitec tile alignment going on there using laser equipment.
Also the tiled floor of the booking hall looks amazing.  I should have taken a shot - will do next week if the Station Blog doesn't beat me to it (or is this classified info to be kept under wraps before opening day!!)