Tuesday 6th Nov.
Eight of us at Broadway today and three of our telephone engineers doing stuff at Winchcombe - so a very good turnout!
In my absence last week the second pair of  thermal compensators were bolted down and connected up. 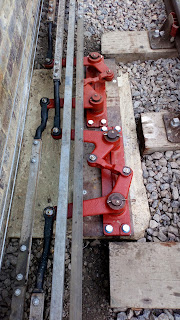 This, with the  connection of the rodding to the fpl for the headhunt points marks the end of the Broadway rodding saga, George and Malcolm here bolting in the last piece : 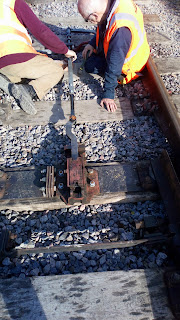 It only remains to fit the slotted stretchers  which the fpl's lock - two new ones are on order for December.
So, on to signal wires. Two more stakes with pulleys need fitting between the south end of platform 1 and Evesham Road Bridge using the nylon rope to get the alignment right. 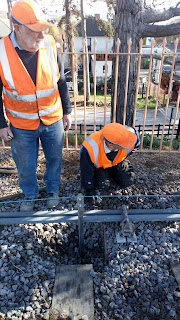 All the necessary pulleys are fitted across the bridge so it now remains to carry on with the stakes every 18ft - they are being sited adjacent to every other roller support block. 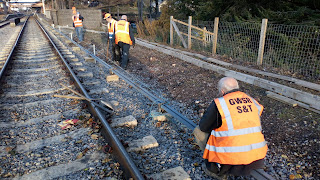 Then a continuous march firstly up to Childswickham Road Bridge for the Advanced Starter and way into the distance for the Home signal (some 720 yards from the signal box) - so a fair number of stakes required.
The Distant signal (a further 600 yards on will be motor operated) so only electrical cable required here. Which leads me neatly into some of the preparation for the cabling that we continued with today.
The cable runs from Toddington to Broadway will be buried in a trench up to Childswickham Road Bridge with connections along the way at line-side cabinets. Between the two bridges cabling will be placed in concrete troughs.
So today saw the aligning of the troughs along the fence line adjacent to the caravan club. Firstly clearing the brambles: 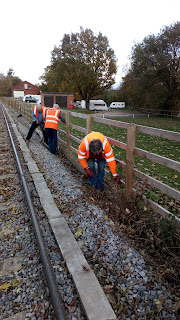 And then levelling off : 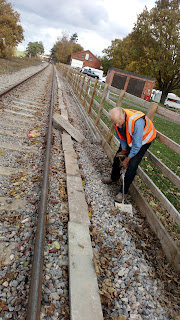 To get a good looking line of troughs. The lids are being left off until the cable appears: 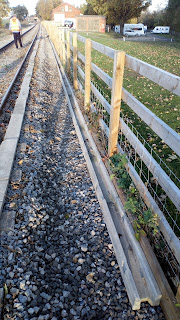 About another 40 yards (=40 troughs) to go to C/Wickham Bridge next week if those involved this week have recovered enough from heaving these monsters about!!

A bit more finishing off has been done at the North end barrow crossing. Here is a view of the platform 2 side with the point rodding re-instated ready for its steel plate. 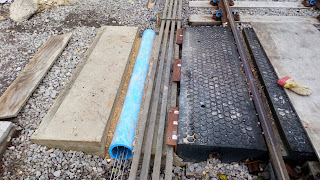 On the other side we have lowered the blue tube slightly and prepared the shuttering for a better thickness of concrete to cover the tube (no steel plate required here). 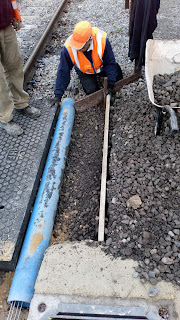 The concrete has been poured but I didn't get a picture - you will have to temper your disappointment until next week!

PS During my time off last week up north I ventured to the Aln Valley Railway at Alnwick and took a ride.
Here is one of their tank engines (Richboro) having a good blast up a 1:46 gradient back into Lionheart station. 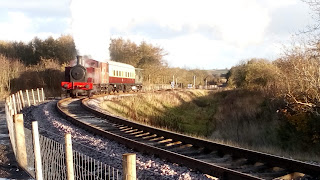