Two Down Two to Go

A good turnout today of 9 and three separate tasks to continue with.
Firstly, Peter W and Paul D headed off south to make a start with the "proper" laying of the cable troughs that had been dropped off the works train last week. A lot of levelling and aligning to get a smart looking run. The lids have been left off ready for cable(s) to be dropped in: 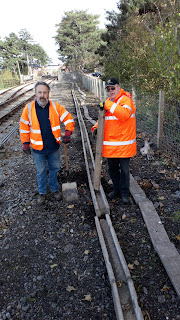 After a full day's grafting the troughing was laid up to the start of the fencing round the goods shed. Only another 200 yards to go to Childswickham Bridge!

George B, Carl S and Keith L set about configuring some shuttering to provide a concrete base and supporting steel structure for a steel plate to span over the point rodding and signal wire tube  at the barrow crossing (platform 2 side north) .
The blue tube has been shortened to match the width of the crossing - the four runs of rodding removed with excavation for a concrete base: 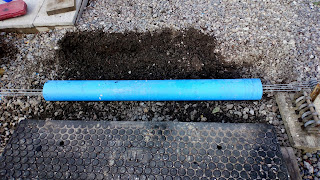 Three pieces of c-channel have been bolted to a piece of inverted rodding. Once concrete has been poured and set the rodding will be unbolted leaving bolting holes for the steel plate which will sit flush with the crossing pads : 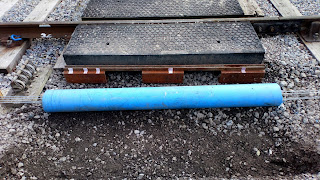 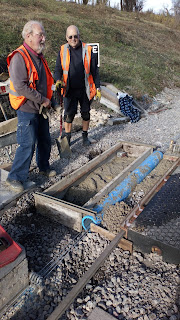 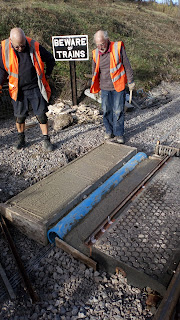 Meanwhile the rest of today's team continued with the fixing of the first pair of temperature compensators. John P in action with the magnetic drill after marking out the positions of the four mounting holes for each unit: 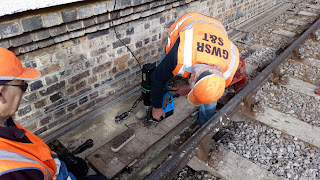 Then re-connecting the rodding and fitting split pins 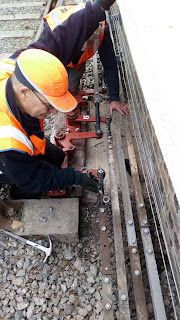 And the completed set up with ballast replaced round the concrete block: 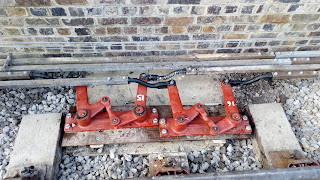 Not enough time left today for fixing the second pair of compensators but we are getting there.
We had quite a lot of interest shown from both the opposite platform and from the coach windows while this work was going on "what are those orange things for? So we had some interesting conversations  - so I think our compensators were the star attraction this week!