The Stools March On

Seven of us off again to Broadway to carry on with the installation of the southbound run of rodding support stools.
The blue pickup had been loaded up at Winchcombe with everything needed for the day : 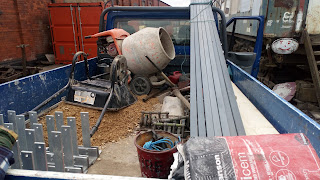 All this then has to be off-loaded on to the large PW trolley (we have borrowed) and walked up to the station. The cement mixer, aggregate and cement are left for mixing on the back of the pickup which is parked at the top of the ramp opposite the ground frame. The concrete will be barrowed up on the trolley later. 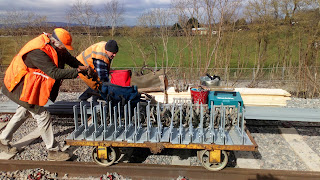 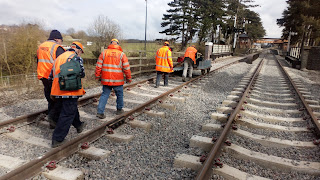 Some preparation work first to prepare a few more shuttering boxes. John P has brought his own portable saw unit to speed things up and to make sure that a nice square box results: 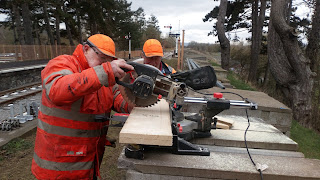 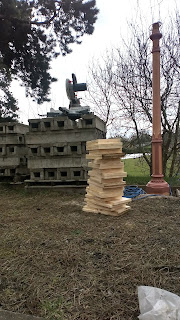 Jim P and Richard C  set about bolting the roller sets onto the Stools - 8 bolts per stool and two lengths of screwed rod. The screwed rod is to stop the unit tipping until the concrete sets.
We need 15 sets of rollers to reach the southern end of platform 2. 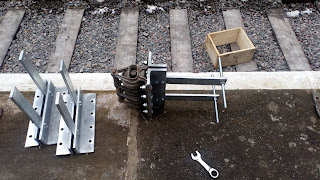 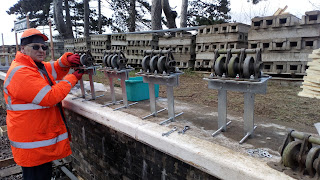 Some rodding was fitted and a lot more tweaking was required to get level and alignment to a satisfactory condition before concreting.  Eventually Malcolm was happy and Keith L began: 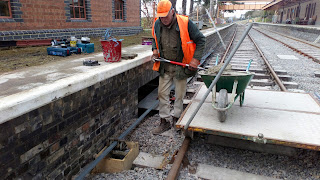 Here is the first one complete. We'll remove the rodding and remove the box next week after the concrete has set. We  have 15 boxes so that will be more than enough to get us up to just short of Evesham Road Bridge. The rodding will then cross under the tracks to cross over the bridge on platform 1 side 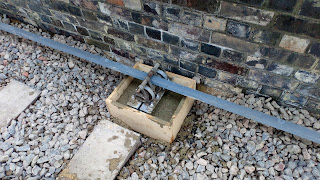 And here we are at the end of the day. Should look good when the boxes are removed and the ballast tidied up: 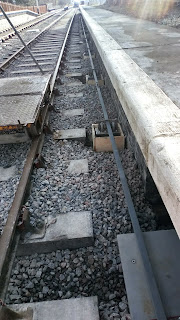 Must have it tidy for Friday 30th!!