A good turnout on a fine day at Broadway with 6 of us in attendance.
We still had a bit of adjustment to make to the ground frame at the southern points to get everything operating smoothly and ensure that blades were seating properly in both positions - this linkage allows for a bit of trim: 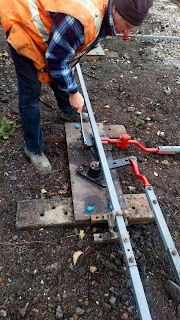 and to make sure that nothing moves a bit of tamping round the concrete blocks : 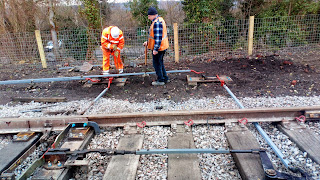 And to ensure that there is no movement between the sleepers holding the FPL and its operating crank a pair of steel straps are screwed to the outside ends of the sleepers - John P in action here : 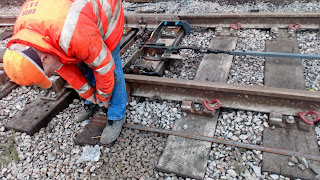 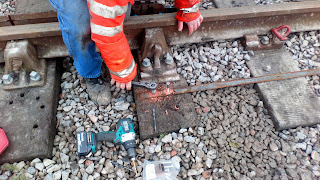 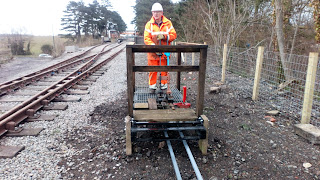 Set for platform 1 approach from Toddington : 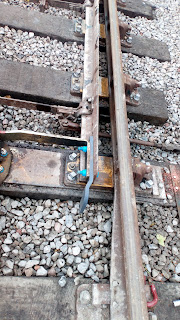 And set for coming out of platform 2 on the run round: 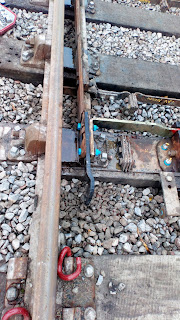 and with the FPL in the locked position 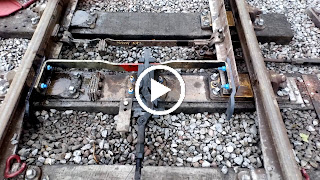 While we were doing this, Neil C, Keith L and Carl S took the blue pickup loaded with all the necessary stuff (including sand, cement and water) to position and concrete in the new speed limit signs at each side of Childswickam bridge. 10mph into the station and 25mph off to Toddington : 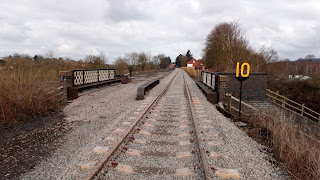 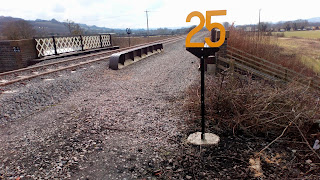 Then off up north to install the hand spring point lever to operate the Headshunt points.
This needed a bit of carpentry to the end of one of the sleepers to cut a slot to clear the base. Tough stuff those new sleepers. 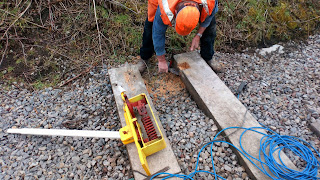 Then mark and drill for four substantial coach bolts: 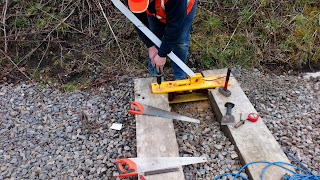 Neil C had brought his own substantial socket set which made the winding in of these bolts a bit easier - even coated with a drop of oil they are a bit of a struggle: 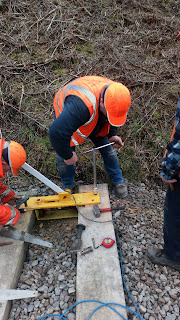 So, four sets of heaves later we have it securely fixed. It must have  a very good seating because it needs a good pull to snap it over. 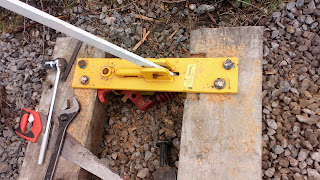 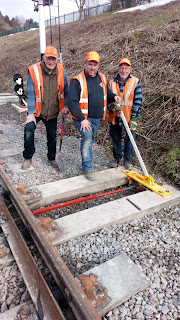 All Pointwork controls at Broadway now complete. Remember that the point into the Siding will stay permanently clipped - unclipped only when access is required to the Siding.

Meanwhile, back down south there is some vandalism going on! It has been decided to remove the unwanted fittings from the bracket signal: 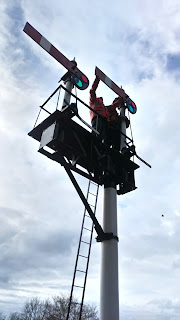 The doll will stay.  Looks a bit bereft without its bits! 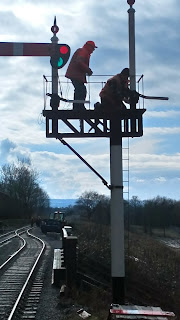 End of day, Keith L decides that a bit more ballast shovelling is good way to wind down. We need to clear between some sleepers for the signal wires to pass through. I think we are clear now that ballasting is finished to start thinking about the next stages of connecting up. 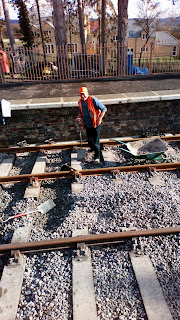 A continuous stream of Broadway members were passing up and down platform 1 with barrow loads of sand for the final levelling  before tarmac team arrive next week. Lots of activity going on all round! All getting pretty exciting and looking good.