Now that the  Concentrator Upgrade scheme is completed for now, and thanks to Keverns clever work, we also have fully operational direct comm's between Toddington and Winchcombe.
We had the circuit working before but using a spare phone connected as a phantom SPT.
Since this is safety critical we always had the fallback on the strowger system extensions

Broadway is the final unit and thats presently under construction deep in a garage in Worcestershire.
We have had to modify the original design for these Box to Box circuits  and this has taken time and brain cells to engineer, shortly it will be added to the box to box circuit between Winchcombe. Gotherington and Cheltenham. 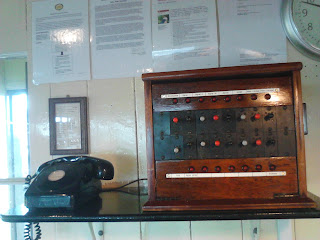 
Incidentally the other circuits based on our ancient strowger  exchanges continues to work - more on Toddington 60 a bit later.

We have started to turn our attentions to the  condition of the Signal Post Phones. Initial inspections show that we need to change about half of them for upgrade and refurbishment , that means that I need to get on and build up some more spares, 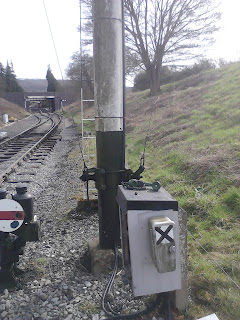 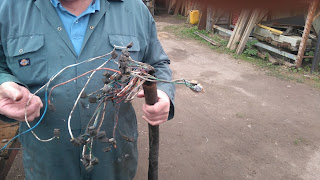 This particular one was sorted out  by Neil  and is the reason why there is now a new  small cabinet opposite Winchcombe Signal Box. Its what happen if connections lay damp for many years. The  crimps were originally grease filled  but the grease  does eventually give up and electrolysis sets in giving all sorts of odd faults. Shortly the old joints inside  Greet Tunnel will be in the scrap , sorry recycling, bin and this will also help to reduce the fault liability. They are very difficult to work on safely inside the tunnel.

I said earlier that the Strowger units continue to work well. On the whole, they do, yesterday Paul and I investigated the problems with the Todd Booking Office internal Phone, we eventually proved it to a particular length  of cable close to Todd Box, those hungry meeces again, we surmise.