No excuses for poor timekeeping today! The Toddington Station clock is now receiving its final black  paint makeover after its mechanical/electrical overhaul somewhere down south.  Here it is , almost second perfect, on the bench in the S & T coach at Winchcombe: 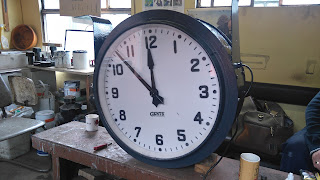 You will have noticed from a previous blog that there is a large pile of point rodding sitting in the yard at Winchcombe which was recently collected from the Great Central Railway at Loughborough. I learnt yesterday that this rodding has quite an interesting history. Apparently it came previously from the Wells and Walsingham Narrow Gauge Railway in Norfolk where it was used as rails.  I mention this because one edge of the rodding has been rolled over by train wheels producing a sharp lip which we have decided must be removed because it is a bit of a hazard to handling and is a potential water trap. So, you know what's coming next!  There are about 130 eighteen foot long lengths to angle grind to remove this lip plus a significant amount of rust and pitting to remove. This should keep us busy for a few weeks. We may need a bit more for Broadway but fingers crossed.we have enough here.

But first things first. The ends of the rodding have a connecting fishplate bolted in. Unfortunately the bolts used are undersize and must be replaced with close fit bolts to prevent any movement during operation. The nuts were well rusted onto the bolts so it was necessary to cut off the off the bolt heads
With an angle grinder - this kept John P busy for most of the day: 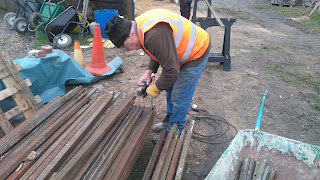 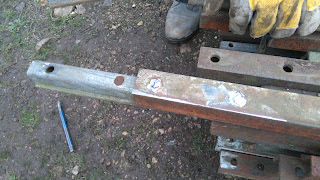 Meanwhile Jim P and I tooled ourselves up with angle grinders and proceeded with the monotonous task of grinding off the lips and some of the rust. We will leave  the final clean until we have the rust proofing paint available 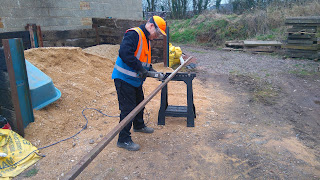 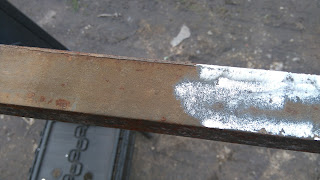 We completed 35 by the end of play 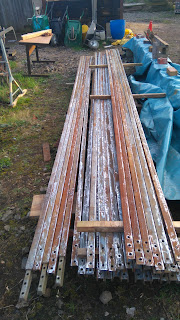 It would be interesting if any blog follower has information about the trackwork ( 10.25" gauge) at Wells and Walsingham and the history of this rodding. Great to see it having a new lease of life at Broadway.

PS Have to admit that we had time off to watch the Race Trains pass through Winchcombe station well tooled up with Guinness and champagne - great to see the Railway in action again.
Posted by Curly at 10:37