Bit down on numbers with only John P, Richard C in with Malcolm W and Neil C

Just a brief post today as 3 of us continued with the exciting cleaning of some of the corroded lengths of point rodding from the pile in Winchcombe yard. Some of it needs scale knocking off with a chipping hammer first followed up with angle grinding.
All the fishplates have been removed and stored.
But we are getting there - should be about two thirds of the way through it now: 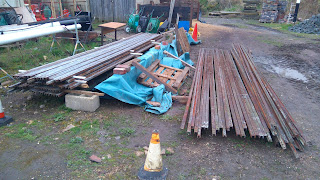 We should have the zinc paint available next week. Need a few dry, warm days then to paint and get them stored at the back of the yard ready for Broadway.

Just a few words about the stools on which this rodding will eventually be mounted. There will be a combination of roller sets which will go in both directions from the signal box to operate points south of Evesham Road Bridge and those north of Broadway Station. Stools will be set at 9ft intervals. 78 of these which will go north from the signal box along the under edge of platform 2 and have already been fabricated in our Winchcombe "workshop" . They are waiting to go away for zinc plating. Here is a picture of one - the roller set will be bolted on top and there will be two pieces of screwed rod bolted to the legs to secure them in a concreted hole ( so quite a bit of  fixing to do once the track level is established) 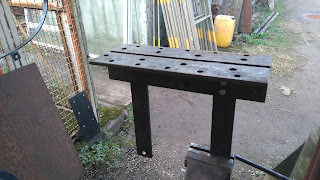 The rest of the stools are already assembled with their respective roller sets bolted on concrete blocks The blocks will be buried in the trackside ballast. Here are some of them hiding between coaches in the sidings: 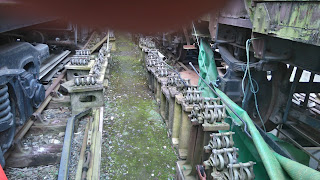 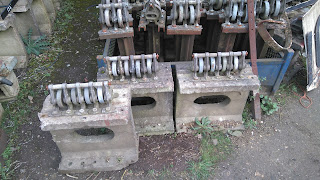 Finally, Neil C busied himself with the Telehandler to retrieve the 2 signal posts that are required for Broadway north. We've set them in half of the concrete boot in which they will eventually be bolted. 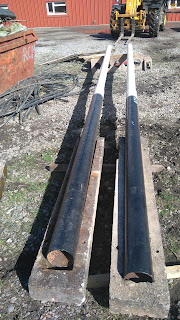 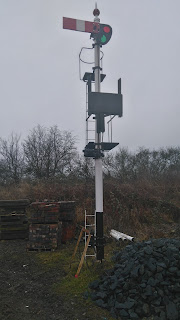