Six of us at Broadway today to
continue with the southwards march of the point rodding.
A bit of tidying up first to remove the shuttering boxes from the concrete blocks we cast a couple of weeks ago. The ones out in the open are easy to knock off - the ones up against the platform wall need a fair bit of coaxing off. So now all the roller blocks are installed up to the point where we need to cross under the Tracks to platform 1 side. 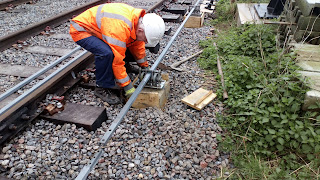 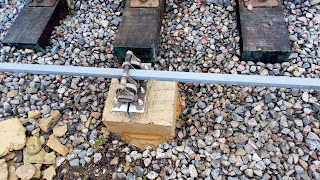 The two sets of rodding are then finally installed and bolted together with fishplates. John P down on his knees (painfully) in the ballast spannering up. 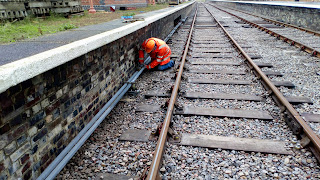 Just a reminder that although we have three sets of rollers here we only need two runs for the points and FPL with the current track layout. The rodding for a second FPL will only be fitted in the future should an extended loop be required.
So, now that we have reached the point where we need to cross over, the installation of a pair of concrete blocks is required on  which will be mounted the cranks to route the rodding through a right angle  So Keith L to the fore with shovel - a mix of roots, soil and ballast here in the shadow of the bracket signal : 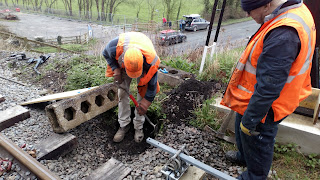 You will see from the next picture that we are using a wooden template to line everything up. P  Way have adjusted sleeper positions for us so that the two runs of rodding will clear. Note the cranked connecting rod that drops the level to enable access under the rails : 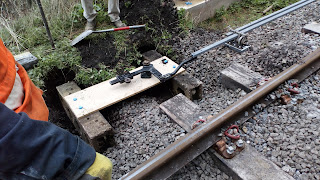 With everything marked in position the template can now be used to mark a steel plate which will be prepared back at base. 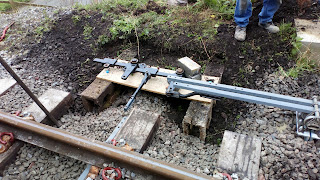 Then over to the opposite side to repeat the operation. But hold on, here comes 2807 on its way into the station - our  day was interspersed with pauses while we stood and waved at the happy travellers - quite exhausting when you start to realise just how long a slowly moving  8 coach train is! 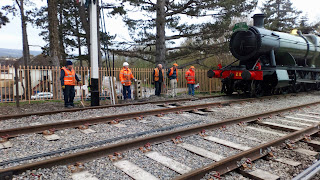 Another pair of Keith's holes in the ballast with the template set for marking out: 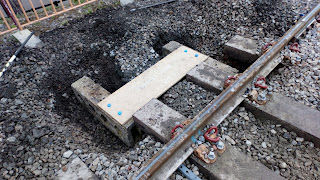 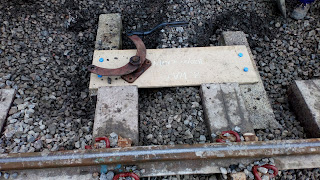 The next  challenge is how to get the rodding over Evesham Road Bridge. Malcolm W and John P discussing how to set the roller blocks. A modified bracket and a small mod to the gravel boards may be required. 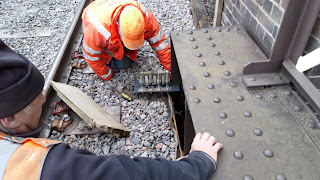 Meanwhile I have volunteered to make good the brickwork at the bottom of platform 2 ramp. You can see how close the rodding is, there is approx half an inch of vertical clearance underneath.
We will replace the top slabs next time when the mortar has set. Brickwork probably not quite up to BAG standards but fit for purpose! 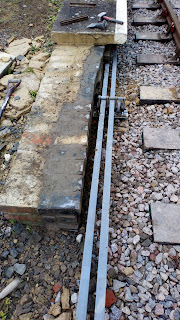 And finally a view looking back to the signal box of the completed runs  of rodding. George had a pull on the two levers in the signal box which slid across smoothly - will require a bit more effort when the points are attached! 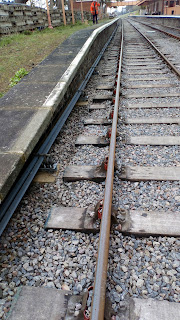